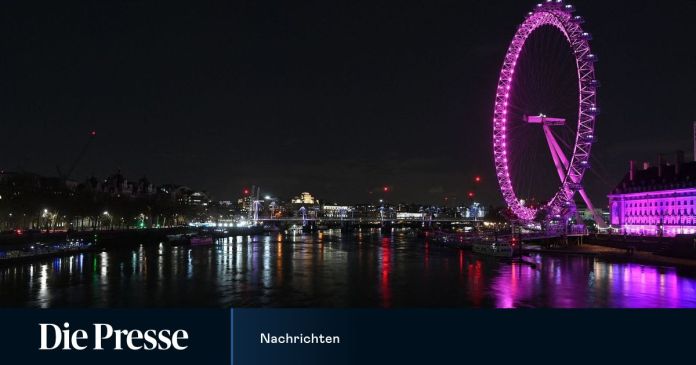 In Austria, too, there was lively participation in what is now the 15th edition of the campaign, during which the lights are switched off for an hour. The Schönbrunn Palace and the Belvedere took part – and the lights also went out in the presidential office.

Numerous people and cities around the world celebrated the “Earth Hour” 2021 on Saturday evening at 8.30 p.m. (local time) and thus committed themselves to climate protection. In Austria, too, there was lively participation in what is now the 15th edition of the campaign, during which the lights are switched off for an hour. From the Opera in Sydney to the Paris Eiffel Tower to the Christ the Redeemer in Rio de Janeiro there were numerous sights.

In Austria, the Schönbrunn Palace and Belvedere in Vienna or the Ars Electronica building in Linz took part. The lights also went out for an hour in the Vienna City Hall. Federal President Alexander Van der Bellen advertised the action on social media on Friday. The presidential office distributed a video showing how Van der Bellen, accompanied by his dog Juli, operates the light switches in the Hofburg. “Once dog content. Always climate protection ”, it says in a post on Instagram.

Numerous cities worldwide took part, including Singapore, Tokyo, Moscow with the Kremlin and Sydney with the world-famous opera house. In Berlin it went black at the Brandenburg Gate, in Paris the Eiffel Tower disappeared into the darkness, in the Vatican Pope Francis switched off the lights of St. Peter’s Basilica and St. Peter’s Square. Lights out was also the order of the day at the famous Roman Colosseum.

In Brussels, the lights at the headquarters of the EU Commission went out. Small actions could make a big difference, tweeted Commission President Ursula von der Leyen. “Especially when the world acts together.” The European Parliament also turned off the lights in all of its buildings.

The “Hour of the Earth” is now being held on all continents in more than 180 countries. More than 7000 cities worldwide take part, according to WWF. “The more people participate, the stronger the global signal,” said WWF climate spokeswoman Lisa Plattner to ensure that the home is also kept in the dark.

In New Zealand, which was one of the first countries in time, the WWF had asked the population to participate widely. Among other things, the Sky Tower observation and telecommunications tower in Auckland and the parliament building in the capital Wellington were shrouded in darkness in New Zealand. In early December, the New Zealand government declared a climate emergency. Prime Minister Jacinda Ardern wants to put climate protection even higher on the political agenda and plans, for example, to make the entire public sector climate-neutral by 2025.

In Russia, more than 30 cities across the country took part in the campaign. One of the first cities was Vladivostok on the Pacific, about eight hours by plane from Moscow. Russia has eleven time zones and is feeling the effects of rising temperatures around the world with the thawing permafrost in Siberia.

Today, according to WWF information, “Earth Hour” is the largest global climate and environmental protection campaign. Since 2007, millions of people all over the world have switched off the lights on a certain day in March at 8:30 p.m. local time, thus setting an example for the protection of the planet. Numerous public buildings are also darkened. The starting shot was once fired in the Australian metropolis of Sydney when around 2.2 million people switched off the lights on March 31, 2007 – and thus made history.

“Think about it every day”: the doctor tells of the horror...

Cathy Hummels posts photos all alone in front of the Christmas...

Leaving Tyrol from Friday only after corona test – test obligation