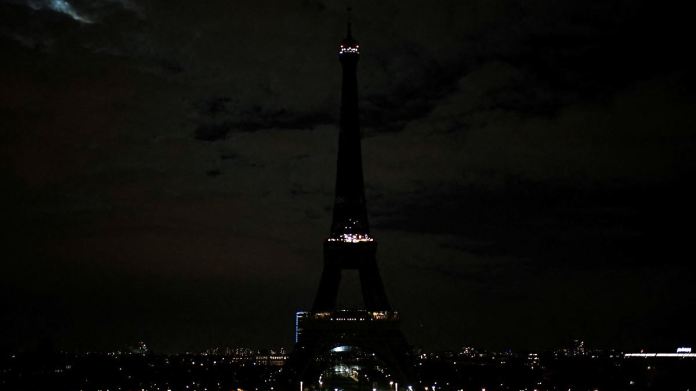 “Earth Hour” for climate protection
The world turns off the lights

The countries around the world extinguish their lights every hour and thus set an example for environmental protection. Whether Singapore, New Zealand, Moscow or Paris, many places are participating. In Germany, the lights go out at 716 locations.
Lights out for climate protection: Despite the restrictions caused by the corona pandemic, people in many parts of the world have set an example for environmental protection with the “Earth Hour”. At 8.30 p.m. local time, the lights were switched off on well-known buildings.

In New Zealand, one of the earliest countries in time, the Sky Tower observation and telecommunications tower in Auckland and the parliament building in the capital Wellington were shrouded in darkness. In Berlin, the Brandenburg Gate, symbol of the end of divided Germany and Europe since 1990, was in the dark. The end was made in North America, where citizens were also asked to turn off the lights. At first, there was no real difference to normal days in the New York skyline.

Many citizens also took part in the campaign initiated by the World Wide Fund For Nature (WWF) and turned off the lights in their homes. The “Earth Hour” is intended to set an example for climate and environmental protection. The darkness is supposed to indicate waste of resources and make people think.

Numerous cities worldwide took part, including Singapore, Tokyo, Moscow with the Kremlin and Sydney with the world-famous opera house. In Paris the Eiffel Tower disappeared into darkness, in Brussels the lights at the headquarters of the EU Commission went out. Small actions could make a big difference, tweeted Commission President Ursula von der Leyen. “Especially when the world acts together.”

The WWF had announced record participation for Germany: 575 cities and municipalities and 448 companies at 716 locations wanted to take part. Nationwide, the lights went out on many town halls, churches, monuments, company headquarters and stadiums. For example, Neuschwanstein Castle, Cologne Cathedral and Frankfurt Paulskirche, but also industrial monuments such as the Duisburg Landscape Park and football stadiums such as the arenas in Mönchengladbach and Schalke remained in the dark.

“With the” Earth Hour “, millions of people around the world are showing that we have to work harder against the climate crisis and for a living planet,” says Marco Vollmar, Head of Communication and Campaign at WWF Germany. “We are all called to go beyond the” hour of the earth “to do our part and keep up the pressure on governments.”

With a view to the federal election and the future federal government, the WWF called for a massive increase in the pace of the expansion of renewable energies. The proportion of clean energy from wind and sun must increase to 80 percent of gross electricity consumption by 2030. In addition, all climate-damaging subsidies would have to be dismantled.

The “Earth Hour” was proclaimed for the 15th time by the WWF. The starting shot was once fired in the Australian metropolis of Sydney, when around 2.2 million people switched off the lights on March 31, 2007 – and thus made history. Because of the corona pandemic, the environmental organization has refrained from public events with a large audience for the second year in a row.

Overview: new virus variant – how dangerous is it? –...