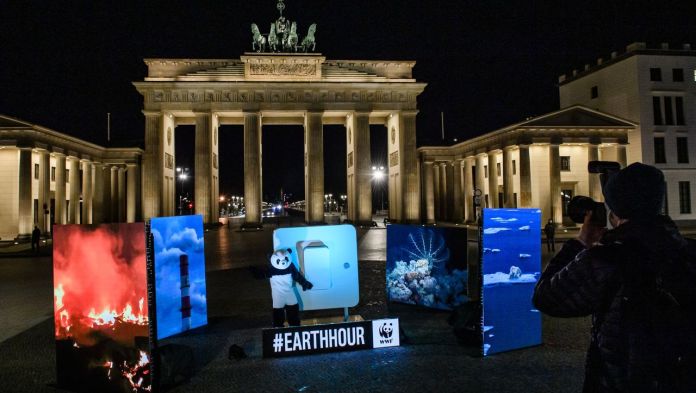 At this year’s “Earth Hour” for more climate protection there was a record attendance on Saturday evening in Germany. A total of 575 cities and municipalities took part, along with 448 companies and countless private individuals, explained the initiator WWF. According to the organization, the lights went out in 192 countries around the world during Earth Hour at 8:30 p.m. – another record.
In Europe, the lights on the Brandenburg Gate and Neuschwanstein Castle, the Eiffel Tower in Paris, the London Parliament and the Colosseum in Rome went out. Previously, Sydney’s famous opera house and the skylines of Asian metropolises from Singapore to Hong Kong each stayed in the dark for an hour at 8.30 p.m. local time.
The South American continent brought up the rear. There, among other things, the obelisk in Buenos Aires and the future museum in Rio de Janeiro were shrouded in darkness. According to WWF, millions of people around the world also celebrated the 15th “Earth Hour” in their own four walls.

Hardly any onlookers because of the corona pandemic

The “Earth Hour” this year was overshadowed by the corona pandemic. Because of the nationwide curfew from 7 p.m., few people in Paris watched the three steps of the Eiffel Tower gradually get dark. At the Colosseum, the police checked the papers of a small group of onlookers. And in other cities, too, the corona restrictions resulted in lower audience numbers than usual.

The event, which has been held annually since 2007, calls for action against climate change and its effects on the environment. This year, the organizers also wanted to point out the connection between the destruction of nature and the increasing incidence of diseases that are spreading from animals to humans – including the Covid-19 disease caused by the coronavirus.

WWF Germany stated that the nationwide record participation shows that in the super election year of 2021, nobody can ignore climate protection.

On our own behalf: Clarification on a false claim by Nina...

Interview with WWE Star Cesaro: “Wrestlemania with fans will be an...

Pregnant influencer Emily Mitchell (36) dies at the dining table: the...

Ivanka Trump and Jared Kushner: crash of a prince couple