Despite all warnings from the government, thousands of Germans flew to Mallorca at the beginning of the Easter holidays. This weekend 130 aircraft from Germany landed in Palma.

The federal government has renewed its warning against vacation travel. “Easter holiday is simply not responsible given the current developments,” said Chancellery Minister Helge Braun of “Bild am Sonntag”. He left it open whether there will be a travel ban, which is currently being examined on behalf of the Chancellery.

At the beginning of the Easter holidays, thousands of Germans flew to the Spanish Balearic island of Mallorca. On Saturday 60 aircraft landed from Germany, today 70 are expected.

The Lufthansa subsidiary Eurowings claims to be flying to the island 44 times from nine German airports this weekend. Last weekend it was twelve. The airline did not provide exact passenger numbers. A spokesman for the company told the dpa news agency that all flights have been “booked quite well” so far. The flight offer is still less than 40 percent compared to the pre-Corona period.

More than 500 connections by April 5th

TUI brought around 2000 package holidaymakers with 15 planes from five German airports to the island. The flights were not fully booked and “on the same level as last weekend,” said the travel company.

According to a report in the “Mallorca Zeitung”, the airport operator Aena expects a total of 532 flight connections to and from Germany from March 26th to April 5th. That is 51 percent less than during the Easter holidays of the pre-pandemic year 2019.

Incidence in Mallorca below 30

The federal government removed Mallorca and the other Balearic Islands from the list of corona risk areas on March 14. Currently, the incidence is 28.71, according to the Spanish Ministry of Health.

The decision of the federal government triggered a booking boom during the Easter holidays. In the meantime, however, it has been decreed that from Tuesday every flight passenger arriving from abroad must present a negative corona test.

Positive? Then to the Corona Hotel

According to information from the “Mallorca Zeitung”, German vacationers who tested positive for the corona virus before returning to Germany can spend the quarantine free of charge in one of the hotels specially set up on Mallorca for the infected. The newspaper reports, citing information from the regional Ministry of Health. But if you prefer to stay in your hotel or holiday apartment, you have to pay for it yourself.

A TUI spokesman for the newspaper told the newspaper that there would be no costs for many holidaymakers anyway. These would be covered by additional insurance that is part of the travel package. Other tour operators would also offer similar safeguards.

The water is currently rather cold – but it is possible to have a meal and a drink on the terrace.

The water temperature near Palma de Mallorca is currently around 14 degrees Celsius – which has not yet led to a rush for the cool water. Rather, people enjoy a shopping spree in the shopping centers or a meal and a drink in the outdoor dining area. The interiors of the cafés and restaurants are closed. There is a curfew from 5 p.m., but restaurants in hotels are open until 10 p.m.

German tourists do not have to fear overcrowding on the Spanish island. Among other things, no British are allowed to travel to Mallorca.

Karl Lauterbach wants the home office to be mandatory: factories can...

Corona: restaurateurs and retailers are running out of money | ... 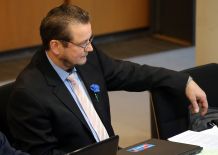