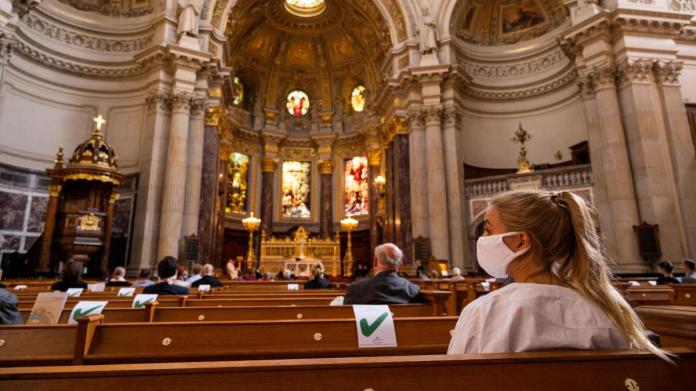 WThe leaders of the big churches were not really sure on Wednesday. Even after queries at the Chancellery, they did not know whether the withdrawal of Easter rest by Chancellor Angela Merkel (CDU) meant that the federal and state governments would no longer ask the religious communities to refrain from attendance at Holy Week and Easter holidays. Catholics and Protestants could only guess that the request is off the table.

Even after Merkel’s U-turn, the bumpy communication that had developed between state and church since early Tuesday morning continued – with numerous surprises for all parties. These surprises became the main reasons why the Chancellor had to ask for “forgiveness” on Wednesday for the “mistake” of a decision that had already been made.

The series of surprises began on Monday evening with the fact that, according to WELT information, it was only during the long break in negotiations during the deliberations between Merkel and the prime minister that the idea of ​​asking the churches not to attend worship services arose. Not even the State Secretary responsible for the religious communities in the Federal Ministry of the Interior, Markus Kerber, is said to have been included in the deliberations beforehand.

And the churches had absolutely no idea of ​​the idea that Merkel and Vice Chancellor Olaf Scholz (SPD) developed together with the Bavarian Prime Minister and CSU Chairman Markus Söder and Berlin’s Governing Mayor Michael Müller (SPD). Namely the formulation: “The federal government and the states will approach the religious communities with the request that religious assemblies only hold virtual during this time.”

That was softly expressed, but still an unmistakable appeal not to gather for church services on the most important Christian holidays. But just a few hours after the end of the federal-state deliberations, the next surprise came.

The churches – which until then had shown themselves to be very cooperative in the matter of Corona and, while accepting internal criticism, had strictly observed hygiene requirements and largely replaced face-to-face services with Internet devotions – did not want to accept a complete waiver of communal services.

The heads of the Catholic German Bishops’ Conference (DBK) and the Evangelical Church in Germany (EKD) showed themselves to be “surprised”, which is a sharp word for state-church relationships. Early on Tuesday, in various conversations, the opinion quickly prevailed that the Chancellor’s request would not be accepted. According to the general assessment, the faithful would hardly understand if there were again nationwide church closings, and these are also de jure voluntary.

With regard to politics, Tacheles then talked behind closed doors on Tuesday afternoon. At a video conference between Kerber and representatives of the DBK, the EKD as well as the Orthodox and the Free Churches, the clergy made it clear that they were not ready to actually lock the houses of God this year, as they did at the Lockdown Easter 2020. Church officials said they were being put in a bad bind by the government.

Because if they were actually willing to renounce, then they would have to listen to all kinds of accusations of sacrificing the freedom of belief to state guidelines. And that although the face-to-face services held by the established churches in recent months with strict distance rules and very low numbers of participants were completely problem-free and did not contribute to the spread of the infection.

But if they openly oppose government pressure – so the churches’ other dilemma argument – then they could run the risk of acting like corona deniers who ignore the virus threat and disregard all the rules. And that is why the state should not even build up that pressure of expectation, withdraw the request and trust that the churches will primarily rely on online formats over Easter and strictly regulate the (not so numerous) assemblies.

The church representatives put forward one more argument. It has to do with their constitutionally guaranteed strength. Because they cannot be forced for constitutional reasons. And that is why politicians, so the argument goes, must expect that there will definitely be individual face-to-face worship services.

And then to a public discussion, why Christians could gather, but no one was allowed to shop on Maundy Thursday. Politicians could not be interested in such a debate. Kerber promised to bring these messages from the churches to the federal and state governments.

“For us, Easter is not just anything”

But the next surprise soon followed: politicians also moved away from the request. “I was astonished that of all parties with the C in their name, the churches are advising not to hold church services, especially at Easter,” said Interior Minister Horst Seehofer of the “Bild” newspaper. Saxony’s Prime Minister Michael Kretschmer (CDU) said on ARD: “We shouldn’t pretend that as politics.” Instead, the churches would have to decide on their own responsibility, and he had no doubt that they would find a “smart and responsible way”.

At the same time, a number of Catholic dioceses and Protestant regional churches announced that they wanted to stick to their previous Corona course. “Easter is not just anything for us,” said the Catholic Archbishop of Berlin, Heiner Koch. One cannot compare church services with business. In large church rooms, completely different distances can be maintained, and the church has “even stricter rules than prescribed”. Therefore, the Archdiocese “does not want to do without attendance services in general, but hold them under more stringent conditions”.

In Lower Saxony, all the Christian churches there jointly declared: “The freedom to practice one’s religion is a valuable asset.” In the sense of the “responsibility of the churches”, it is everyone’s goal “within the framework of the previous regulations of the Lower Saxony Corona Ordinance, also over Easter services to celebrate presently as well as digitally ”. It was also this joint resistance from churches and politicians that prompted Merkel on Wednesday to withdraw the Easter rest.

Whereby on Wednesday afternoon there was still the theoretical possibility of another surprise: that politicians would continue to try to persuade the churches to at least largely renounce attendance services. That she would not do that was only concluded from the fact that the Easter rest period in the federal-state resolution had also included the waiver request and that this became obsolete when Merkel revoked the Easter rest period. But whether this conclusion was justified initially remained unclear.

Withdrawal of the “Easter rest”

The press spokesman for the Catholic Bishops’ Conference, Matthias Kopp, tweeted accordingly cautiously: “We assume that we will be able to continue celebrating services if all protective / hygiene measures are observed.”

In an interview with WELT, Kopp said: “Talks are currently being held in the federal states between the federal states and the dioceses on how church services are celebrated in person on the Easter holidays. The dioceses and parishes have shown in the past months that they are aware of their responsibility by holding the face-to-face services. Compliance with all protective and hygiene measures is a matter of course. ”

Meanwhile, Vice Government Spokeswoman Ulrike Demmer said the government wanted to find an amicable solution to the Easter services and talks with the churches had already started.

In this respect, the only thing that is certain so far is that the churches have achieved a point victory – and that their communication with politics is not always as harmonious as many critics of what they consider to be a far too close state-church relationship generally imagine.

FC Barcelona no longer to David Alaba, but to Haaland? ...

There are still strict rules for traveling from Tyrol to Germany

This is how podcasting works – Radio Leverkusen

Apparently people smuggled in a crash with 13 deaths in the...

19 – Brazilian corona mutation detected in Germany for the first...

Tesla stock, the S&P 500 and the looming Yahoo effect

Daimler manager now runs a vaccination center – after her own...