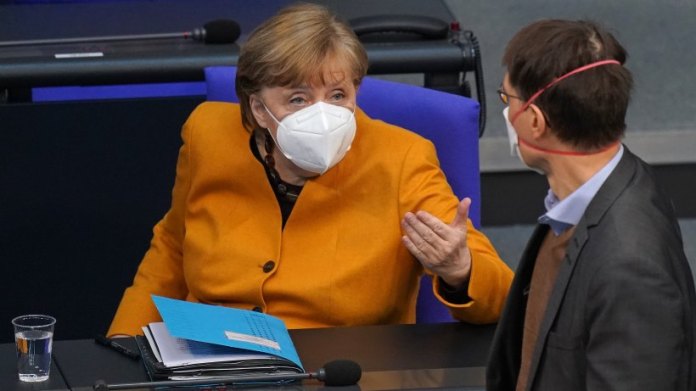 Rest days canceled over Easter – those were the problems

At Easter, “rest days” were initially planned over Maundy Thursday and Holy Saturday. These have now been deleted. This is currently known.

The second Easter holidays in the corona pandemic should be just as quiet as in 2020: The lockdown was extended to April 18 at the latest federal-state summit. First of all, an “extended rest period” was planned from April 1st to 5th – with “Rest days“on Maundy Thursday and Holy Saturday. But the Easter rest has now surprisingly been canceled.

But no rest days at Easter: Merkel asks citizens for forgiveness

Shortly after a briefly convened federal-state switch, the Chancellor made a press conference on Wednesday. “We have decided not to bring the Easter rest on the way,” said Merkel. It was decided with the best of intentions. “We absolutely have to stop the third wave,” she said. But the implementation was ultimately not possible “in the short time”.

“This mistake is only mine,” the Chancellor clarified. On error must be named and corrected as such. “Above all, that has to be done on time.” You are aware that the withdrawal will cause uncertainty. “For this I ask the citizens’ forgiveness,” said the Chancellor.

Merkel decided in the morning not to initiate the regulations on Easter rest, but to stop them. The reason for the decision was that too many follow-up problems would have arisen – as decided – Maundy Thursday and Holy Saturday would have been declared rest days. Expenditure and benefit are not in a good relationship, Merkel was quoted by participants in the completely surprisingly convened group with the state heads of government.

With the end of Easter rest, Maundy Thursday is a normal working day, as it is otherwise the case. Also, Holy Saturday will not count as a day of rest as previously planned.

North Rhine-Westphalia’s Prime Minister Armin Laschet (CDU) said on Wednesday that the withdrawal of the controversial resolutions is good for political culture in Germany. He himself made it clear at the Prime Minister’s Conference that everyone in the group bears responsibility, not just Chancellor Merkel. “We all agreed to that.” Laschet appealed to the population, nevertheless as much Easter rest as possible to stop off.

Vice Chancellor Olaf Scholz (SPD) has also described the now overturned regulation as a joint decision made by the federal and state governments. “Nobody should shirk their responsibility,” said the finance minister on Wednesday in Berlin when the government presented the key figures for the federal budget for 2022. He hoped that there were no “memory gaps”.

Saxony’s Prime Minister Michael Kretschmer (CDU) has also defended the Chancellor. “I don’t think you have to take responsibility for it. This decision was made jointly by 16 Prime Ministers and the Federal Government,” he said on Wednesday on the sidelines of the Landtag session in Dresden: “We have made many correct decisions in this country over the past twelve months given. ”Monday’s decision is not one of them. That should be said openly and clearly. But it happened in good will.

Associations welcome the withdrawal of the rest days

The German Trade Association (HDE) has welcomed the withdrawal of the rest days as a “signal of reason”. The short-term planned closure of the grocery store on Maundy Thursday would have “led to an increased number of customers on the days before and after,” said the HDE on Wednesday. In times of pandemics, however, it is a matter of “equalizing the number of customers”.

Employer President Rainer Dulger also praised the withdrawal. “The chancellor’s courageous decision proves her leadership,” said Dulger on Wednesday in Berlin. There is no blueprint for managing the corona crisis. It is also difficult as an employer to make decisions and to cash in on some of them. “I have all the more respect for the fact that the Chancellor has withdrawn the decision.”

Rest day: What was agreed at the Corona summit on Monday?

At the Corona summit it was decided Maundy Thursday and Holy Saturday as part of a so-called “Resting phase” to rate:

Rest days over Easter: companies had severely criticized the decision

After the resolutions of the Bund-Laender Roundtable, displeasure arose above all from the fact that, despite almost twelve-hour discussions, the implementation of key points was still open. Lots Business associations had strongly criticized the unclear regulation on the rest days: “The mood is subterranean,” said a large business association. Desperate entrepreneurs, HR managers or logisticians wanted to know what exactly the rest days would have meant.

Read here: Which shops are allowed to open at Easter?

The CDU Economic Council welcomed the Chancellor’s decision to stop the Easter rest and described it as correct and sensible. Secretary General Wolfgang Steiger told the German Press Agency on Wednesday: “The feedback from citizens on this short-term measure was rightly devastating, at the same time it would have led to chaotic scenes in retail next week.”

It is now a matter of presenting clear opening plans so that citizens and companies have long-term prospects, says Steiger: “We cannot work our way from lockdown to lockdown every three weeks. Many companies are up to their necks, they need planning security.”

Lenzing issued hybrid bond for half a billion euros – share...

Balance of art house cinemas: 2020 brings a drop in sales...

Sergio Perez – nobody had to wait longer on their first...

Union Berlins Friedrich in the focus of Bayer Leverkusen – Among...