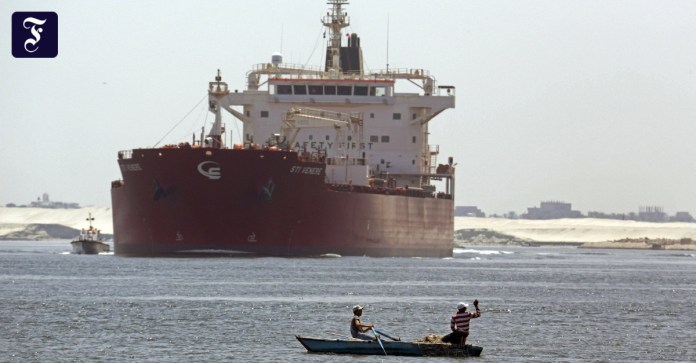 Ein Freighter ran aground in the Suez Canal on Wednesday night and has since blocked the important shipping route between Asia and Europe. Several tug boats were initially in use around the freighter, as could be seen on the ship’s radars vesselfinder.com and marinetraffic.com. Accordingly, congestion from container ships formed both north and south of the canal.

The incident occurred on Tuesday, said the shipping and logistics company GAC on its website. There was a power failure on board the freighter.

According to the ship’s radars, it is the freighter “Ever Given”. According to vesselfinder.com, it is 400 meters long and 59 meters wide. The ship, built in 2018, is sailing under the Panamanian flag, it came from China and is on its way to Rotterdam in the Netherlands.

It was initially unclear when the shipping route could be opened again. A notification from the sewer authorities was initially not available. The Suez Canal is by far the most important bottleneck for the global economy. A tenth of the world’s maritime trade goes through the narrow channel between the Mediterranean and Red Seas. Without it, freighters from Asia would have to travel around Africa, which would extend the route by 7,000 kilometers.

“Blackmail”: Because the content doesn’t fit, Nvidia saws off a tester

PS5: No Sony console yet? Fan tool helps with searches...

Over 45,500 Covid ads in three months of lockdown