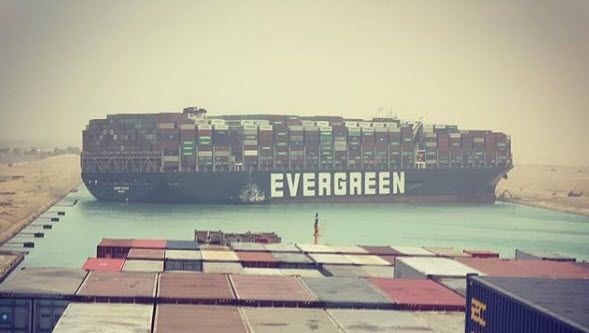 The Suez Canal in Egypt has been closed in both directions for several hours. The reason for this is the freighter “Ever Given”. The 400 meter long and 59 meter wide container ship has apparently completely paralyzed traffic on the waterway. As “City AM” reports, the ship built in 2018 is currently sailing under the Panama flag and is on its way from China to the port of Rotterdam. The “Ever Given” came across six kilometers north of Suez. The cause is not yet known.
Users posted pictures of the stuck freighter on Twitter and Instagram.
One user reports that the liberation campaign took several hours. It would appear that “every smuggler Egypt could do without is trying to pull it free.” You can follow the action live with the ship tracker from »Vesselfinder«.
The Suez Canal offers ships a clear shortcut. It costs around 250,000 euros to go by ship through the waterway. For many shipping companies it is still a worthwhile expense – they save yourself the circumnavigation of all of Africa around the Cape of Good Hope.

Test first, then shop: from Monday also allowed in Dorsten

That’s the top performer of the last weekend! – Hockey-News.info

E-bike bargains 2021: Here you can find the currently cheapest pedelecs

Jungle camp: horror at Bea Fiedler’s “IBES” – why she was...

Frankfurt am Main: Road works on Bremer Strasse between the Anlagenring...