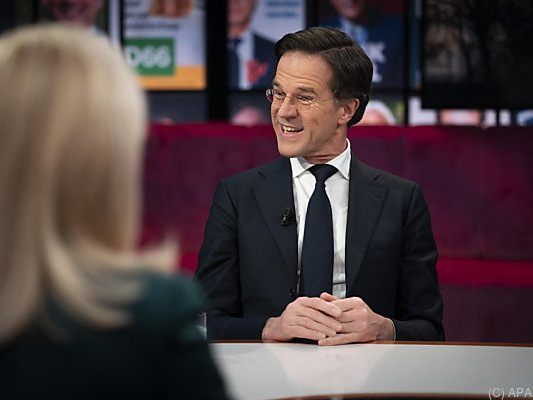 In the parliamentary elections in the Netherlands, a fourth term of office for Prime Minister Mark Rutte is looming. At the end of the three-day election on Wednesday, people flocked to the polling stations in large numbers. Around 13 million Dutch people are asked to vote for the 150-seat parliament. A total of 37 parties are available for election. The first forecasts are expected shortly after the polling stations close at 9 p.m. (CET).

According to the latest polls, which were carried out after the election began on Monday, Rutte’s conservative-liberal party VVD comes to 25 percent. The 54-year-old is thus heading for another term of office. He has been Prime Minister since 2010. The left-liberal coalition partner D66 of Sigrid Kaag, like the largest opposition party, the right-wing populist PVV of Geert Wilders, was at twelve to 14 percent. The Christian Democrats (CDA) are also likely to be among the front runners.

According to the market research institute Ipsos, the turnout until 11 a.m. was around 30 percent. Around eleven percent voted until Wednesday 11.00 a.m., on Monday and Tuesday twelve percent of those eligible to vote, around seven percent cast their vote by postal vote, as the newspaper “de Volkskrant” reported. The option of postal voting was introduced for the first time due to the corona pandemic – but only for people over 70.

The election is largely seen as a vote on how the government will deal with the corona crisis. The process was also dominated by the pandemic. The polling stations were open for three days to avoid large crowds. Older and particularly vulnerable people should vote on the first two days, the rest of the population then on Wednesday. Because of the assembly bans, the election campaign focused on television debates.

A total of 37 parties stood for election – that is a record. According to the polls, 17 of them could move into the Second Chamber (Tweede Kamer). It is unclear whether the previous coalition of Rutte’s right-wing liberal VVD with the Christian-democratic CDA, the left-wing liberal D66 and the small ChristenUnie will again receive a majority.

The Dutch government announced its resignation in January in the middle of the pandemic. The background to this was a scandal about child allowances that were wrongly reclaimed, which had driven thousands of families into financial need.

Because of the corona pandemic, the Dutch also chose some very unusual places – for example in churches, in a former prison and in a cemetery. A polling station for cyclists was opened in Amsterdam on Monday. The reason for this is that the distances can be maintained better. A polling station, for example, opened in the New Church in Delft, which houses the crypt of the royal family and the tomb of the Dutch national hero William of Orange (1533-1584). In The Hague, for example, the green top candidate Jesse Klaver voted in the art museum with central works by the abstract painter Piet Mondrian. In Utrecht, voters cast their votes in a cemetery building, in Arnhem in a former prison.

Apartment building on fire – one injured

Knife rammed into the stomach: Attack in Bad Homburg from today...

More cold help places for the homeless in Berlin – miscellaneous...

19 – Excess mortality has increased in Germany