The World Cup qualification has started anything but good for the Dutch national team. Surprisingly, the “Elftal” lost in Turkey – and was partially demonstrated.

The hopes of the guests themselves for a draw were not fulfilled even after the goals of the former Bremen Davy Klaassen (75th) and Luuk de Jong (76th). The game in Group G was the first in European qualification for the 2022 World Cup in Qatar.

De Boer had done without striker Wout Weghorst from VfL Wolfsburg for the first World Cup games, which also sparked a lot of discussions in the Netherlands. Weghorst has already scored 17 goals for VfL in the Bundesliga. The Elftal had missed the 2016 European Championship and the 2018 World Cup; However, the Dutch have qualified for the EM, which has been postponed to 2021. On Saturday the Dutch will play against Latvia in Amsterdam and three days later in Gibraltar.

Europe has only 13 places available for the 2022 World Cup. The 55 participants were drawn into ten groups of five or six. Only the ten group winners are directly qualified for Qatar.

That’s how long you are protected

Slippery ice affects traffic and teaching in the north | ... In Germany too, things are simmering 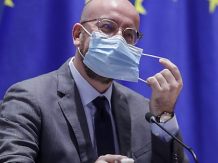 EU puts pressure on vaccine manufacturers due to delays – coronavirus...