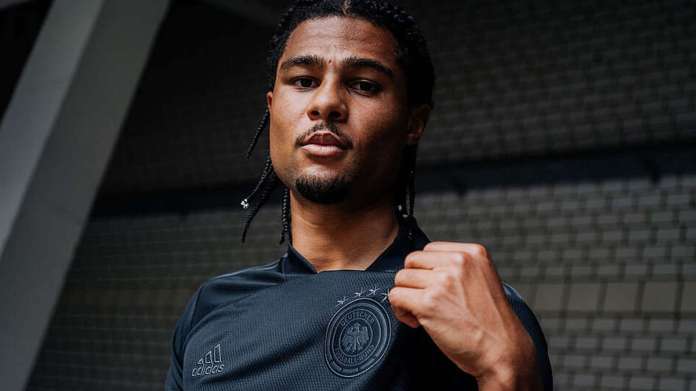 On Tuesday, the DFB and Adidas presented the new away jersey for the national team. It is reminiscent of a strong tournament under Jogi Löw.

Frankfurt – The upcoming European Championship will probably be extraordinary for the German team. With his surprising announcement of his resignation, national coach Jogi Löw * took the team some pressure off his shoulders. Not only this circumstance and Löw’s modern way of preparing for the tournament * are unusual, the new clothing for the national players is also special – and reminds of Löw’s first World Cup as head coach.

DFB: The Löw-Elf’s new jersey is reminiscent of the legendary World Cup – Adidas is modernizing the design

The jersey is mainly reminiscent of the black design from the 2010 World Cup, when Löw led the team to the semi-finals at his first World Cup as national coach in South Africa. At that time, the national team eliminated England and Argentina, among others, but failed because of the eventual tournament winner Spain. The association would like to see a similarly successful tournament this year as well.

According to Adidas designer Jürgen Rank, they wanted to modernize the black 2010 jersey. “Eleven years after the last DFB dress in black, we have gone one step further for the upcoming tournament: Not only our distinctive three stripes on the shoulders, but also the four stars for winning the world championships are almost tone in tone and shimmer anthracite, ”he says on the DFB homepage.

In fact, the untrained eye has to look twice to recognize the logo of the Franconian supplier and the DFB coat of arms with the federal eagle. The German flag, which adorns the sleeves and collar of the new jersey, clearly stands out. The numbers on the back and the flock with the player’s name are also kept white. The pants and the socks are also kept black and complete the impressive appearance.

The reactions of the fans were not long in coming. While around half of Twitter users praise the jersey design, there are also some critical voices. “Mournful look for leaving after the group phase,” says a pessimistic fan, “looks like a training shirt,” writes another. The top comment under the Instagram * post, however, picks up on an apparently more important topic: “Müller would definitely look fresh in the jersey”. In black jersey, the then 20-year-old Thomas Müller became the top scorer in the 2010 World Cup, it is clear that many fans want a comeback. (ajr)

16 days against violence against women: 6 Hohenems buildings shine in...

WHO does not reject Wuhan laboratory orthosis after all

Fight against Corona: who will be vaccinated first?

Tele 5 is laying off around half of all employees

Strong recovery with a return to normal in the second half...