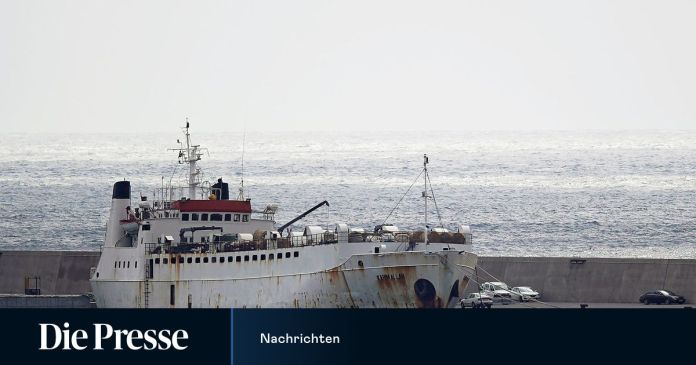 Originally, the animals were supposed to be exported from Spain to Turkey in December, where they were not allowed to be unloaded because of the suspected bluetongue disease.

More than 900 cattle that had been cooped up on a freighter on the Mediterranean for around two and a half months are now being slaughtered in Spain. Originally, the animals were supposed to be exported from Spain to Turkey in December, where they were not allowed to be unloaded because of the suspected bluetongue disease.

After much back and forth, the freighter “Karim Allah” has now returned to the port of Cartagena in southern Spain. The animals began to be unloaded there on Saturday, as reported by the state TV broadcaster RTVE. Spanish media reported that they were supposed to be killed in a tent by the pier and the carcasses disposed of. 22 cattle have already died during the months at sea.

The cattle ship then reportedly called on Libya in the hope of being able to sell the animals there. But the authorities there did not approve either. In search of food for the animals, the “Karim Allah” drove towards Tunisia, where the ship was also turned away. It was only in the port of Augusta in Sicily that food could be brought on board after the animals had only received water for three days, according to the newspaper “El País”. Then the freighter sailing under the Lebanese flag returned to Cartagena.

According to RTVE, there are currently around 1,800 other young animals from Spain in a similar situation on the cattle freighter “Elbeik” flying the Togo flag, which was also turned away in Turkey and Libya on suspicion of bluetongue. According to information from tracking services for ships north of Crete, the ship was on a southerly course on Saturday.

Hundreds of millions for Germany from Brussels against Brexit consequences

Ikea catalog is discontinued: circulation higher than the Bible

Mercedes launch in the video: Is Lewis Hamilton still in the...

0-0 in the Manchester derby – Chelsea lose at Everton