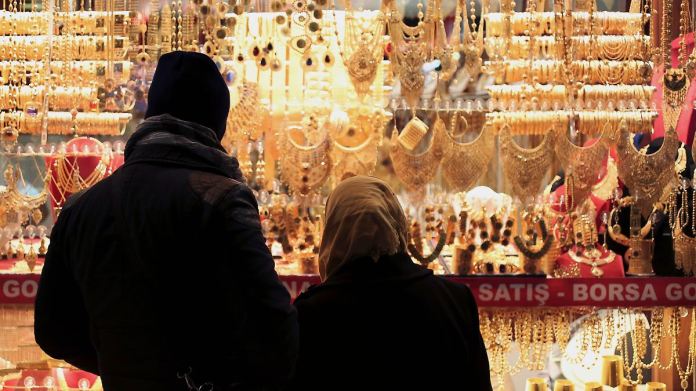 With the dismissal of the third central bank chief within two years, President Erdogan has shaken confidence in the Turkish currency again. In order to support the lira, he is now calling on his citizens to invest their private gold and foreign exchange holdings.
After the Turkish lira crashed, President Recep Tayyip Erdogan called on his compatriots to invest their accumulated foreign currency or gold holdings to stimulate the economy. His appeal is directed at citizens “who keep foreign currency and gold at home just to feel safe”.

At the party congress of his Islamic conservative ruling party, the AKP, Erdogan said in Ankara: “From these, my citizens, I want them to invest the foreign exchange and gold in their homes, which is our national property, in various financial resources and thus in the economy and Bring in production. ” He also called on investors to trust Turkey.

Turkish citizens, as well as domestic and foreign investors, apparently recently felt that their assets were not safe in the Turkish currency. The lira and the stock exchange prices in Istanbul had plummeted at the beginning of the week. The trigger was Erdogan’s dismissal of central bank chief Naci Agbal over the weekend. The lira fell by 15 percent at times against the US dollar, and the Bist 100 stock market index lost almost 10 percent.

During his short term in office, Agbal had regained confidence in Turkey’s fickle monetary policy. By raising interest rates, he had stabilized the lira, which had previously fallen sharply, although President Erdogan is an opponent of high interest rates. The latter is likely to have become Agbal’s undoing. The new head of the central bank, Sahap Kavcioglu, is a former MP for Erdogan’s AKP and the fourth occupation in two years.

2020 was already a terrible year for the Turkish lira. It lost around 20 percent of its value against the dollar. For the population, this loss of value is reflected in horrific inflation. In February it was almost 16 percent. Erdogan’s appeals to the Turks to swap private foreign currency and gold holdings for lira had already largely gone unheeded several times in the past.

Jitters and fantasies at the start of the German super election...

Coronavirus in Germany: Drosten prefers not to evaluate vaccine orders –...