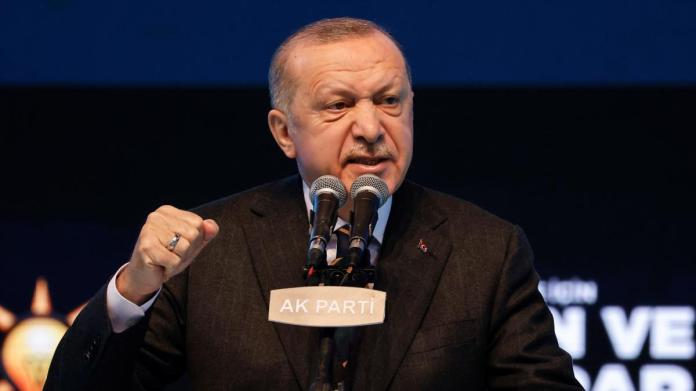 foreign countries “Insult” to the President

A front page of the satirical magazine “Charlie Hebdo” showed a caricature of Turkish President Erdogan last year. Now a Turkish public prosecutor is demanding up to four years imprisonment for the author of the drawing and for three editors.

WA Turkish public prosecutor takes action against four representatives of the French satirical magazine “Charlie Hebdo” in a caricature by Turkish President Recep Tayyip Erdogan. According to the state news agency Anadolu on Friday, he called for up to four years in prison for the author of the cartoon and three senior editors for “insulting” the president.

The publication of the cartoon last October had further deepened tensions between Paris and Ankara.

The caricature on the cover of “Charlie Hebdo” showed Erdogan in underpants with a can of beer, lifting the skirt of a veiled woman with the words “Ooh, the Prophet” and exposing her bare bottom. Erdogan spoke of a “disgusting attack” at the time.

In his indictment, the prosecutor described the drawing as “vulgar, obscene and defamatory”. It falls “in no way under the freedom of expression or freedom of the press”. For a trial, however, the indictment has to be formally accepted by a court.

The international organization Reporters Without Borders accused Turkey on Friday of wanting to extend its censorship to other countries.

Dispute between Erdogan and Macron

The tensions were triggered last year by statements by French President Emmanuel Macron after an Islamist attack on a teacher near Paris who had shown Mohammed caricatures by “Charlie Hebdo” in his class. In the name of freedom of the press, Macron defended the republication of the Mohammed cartoons by “Charlie Hebdo”.

A law with which Macron intends to step up action against Islamists after the attacks in Paris and Nice and to limit the influence of Turkey and other countries on French mosques also met with sharp criticism. A few days ago, Macron warned Turkey against “attempts to interfere” in the presidential election next year – in Paris there are fears that Erdogan could call on voters of Turkish origin to vote against Macron.

Berlin gets less vaccine: it can take better advantage of it

Nine doctors in connection with Covid-19 targeted by the judiciary Reactions to Corona Resolutions: “Get a bit of the brakes on”