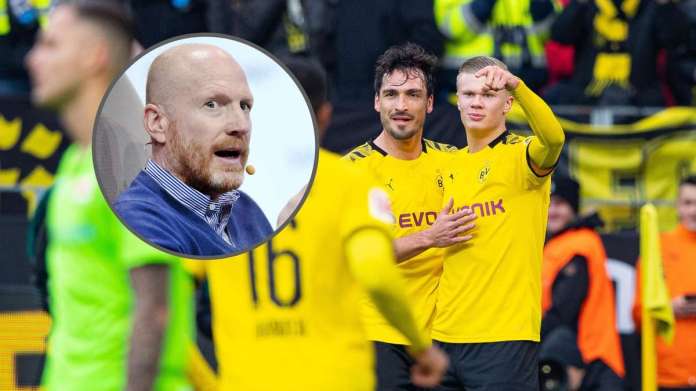 At BVB there is great fear that Erling Haaland could leave the club. According to Matthias Sammer, another player is even more important for Borussia Dortmund.

Dortmund – Erling Haaland (20) still has a valid contract with Borussia Dortmund until June 30, 2024. Actually, everything could be so simple, but the goal machine (21 hits in 21 league games) arouses desires. The Norwegian striker’s whereabouts in Dortmund is by no means as certain as the term of the contract suggests.

The rumor mill has recently simmered again in Spain. Real Madrid are preparing an XXL package for a transfer of BVB star Erling Haaland, it said. Usually, those responsible for the German runner-up should at best take note of such reports with a shrug.

However, a report by the Spanish sports newspaper is explosive AS, according to which the 20-year-old striker makes his stay at Borussia Dortmund beyond the summer dependent on participation in the Champions League in the coming season. Erling Haaland is said to have made this clear to his advisor Mino Raiola (53).

BVB: According to Matthias Sammer, a change from Erling Haaland would not be the greatest possible loss

On Strobelallee, people thought they were more or less safe with a view to the future of the Norwegian. According to reports, the promised exit clause will not take effect until next year and Hans-Joachim Watzke (61) does not expect any “immoral offers” in the summer due to the corona consequences, as he does kicker betrayed (all news about Erling Haaland on RUHR24.de).

In view of the latest reports from Spain, the alarm bells should actually ring at BVB. At least that’s what you should think. Against this background, statements by Matthias Sammer (53), which he spoke to in an interview with Sports picture (March 24 edition).

Basically, Matthias Sammer hopes that Erling Haaland will stay with BVB. At the same time, the external advisor to Westphalia also emphasizes that the departure of another professional in the summer would cause him much more stomach ache – Mats Hummels (32) is meant.

The defender and former international not only stabilized the team in the current season, but also defended coach Edin Terzic (38) in a difficult situation in a way that impressed Matthias Sammer. “That is a trait that we will need urgently in the future.” Meanwhile, the Ruhr Nachrichten reports that Matthias Sammer has not yet given up hopes for a title with BVB.

According to Matthias Sammer, Mats Hummels, Marco Reus (31), Thomas Delaney (29) and Emre Can (27) form the heart of the Dortmund team. At BVB, these experienced leading players are particularly important because the black and yellow squad is traditionally peppered with many young talent.

“At 17, 18, 19 years of age you still need help, you can’t understand everything yet. If these players are not actively influenced, I need not be surprised that the young players break out, ”said the 53-year-old. Especially with the development of Jadon Sancho (20), the team of leading players around Mats Hummels would have done a great job.

In the past, the Englishman neglected other tasks in the hunt for goals and assists. According to Matthias Sammer, communication with the leading players and the coach would have resulted in a noticeable improvement. The intensity with which Jadon Sancho works after losing the ball is now different.

Matthias Sammer doesn’t have to worry about Mats Hummels leaving BVB. The 32-year-old’s contract is dated until summer 2022. After his return to Borussia Dortmund in the summer of 2019, the defender quickly found his way around and apparently feels at home. Meanwhile, quite a few experts in Germany are demanding that national coach Joachim Löw (61) nominate Mats Hummels for the upcoming European Championship.

Actually, the days of the former Munich national in the national team were counted after Löw sorted out the 2014 world champion two years ago together with Thomas Müller (31) and Jerome Boateng (32). After the screwed up World Cup, this should herald the change.

BVB defender Mats Hummels for EM 2021? According to Matthias Sammer, it can be a cornerstone

Since then, a lot has happened. In the meantime, Thomas Müller and Jerome Boateng won the triple with FC Bayern Munich and were in the starting line-up in the Champions League final against Paris St. Germain (1-0). Mats Hummels flourishes at BVB.

Matthias Sammer is therefore hoping for a comeback in the national team. “The best should go to the tournament. Mats can be a cornerstone that stabilizes the team, with no ifs or buts. ”The same applies to Thomas Müller. German football could not afford to do without him.

Roof fire on the former “Entenkeller” in Berlin

How Perseverance lands on Mars

“The lockdown is taking too long”

Corona mutation in the UK does not affect vaccination

Medvedev moves into the final of the Australian Open