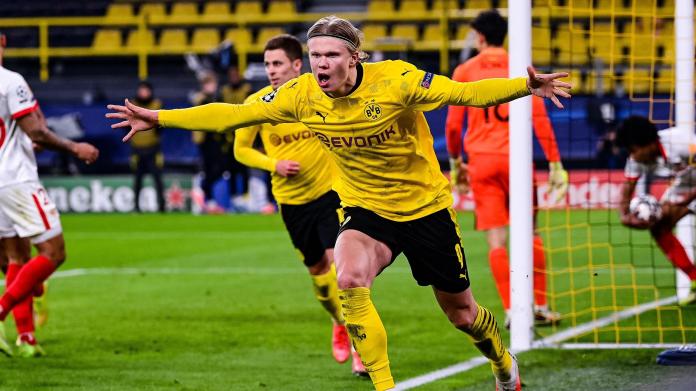 The exceptional Norwegian striker scored a staggering 33 goals in 31 games in all competitions this season.

So it is hardly surprising that Haaland has been associated with Real Madrid and numerous Premier League top clubs (Liverpool FC, Chelsea FC, Manchester City) time and again in the recent past.

However, according to the report, potential interested parties would have to dig deep into their pockets in order to secure the services of Haaland.

BVB is said to have proclaimed no less than the second highest transfer fee behind the scenes for the 20-year-old – and the BVB managers allegedly do not want to deviate from that point of view.

According to “ESPN” the black and yellow want to show a clear edge in the Haaland case as last summer in the negotiations between Jadon Sancho and Manchester United.

At that time, a transfer of the English shooting star failed because the Red Devils did not want to pay the rumored transfer fee of 110 million euros.

You might also be interested in: Nübel consultant speaks plain language: “Match practice is becoming even more important”

Strong sign, Norway – now the ball is in the hands of the DFB and FIFA

Positive attitude towards the new year 2021

Corona news on Monday: The most important developments on Sars-CoV-2 and...

When? What exactly? And how long ?: The struggle...

Economy is heading for a winter recession due to lockdowns