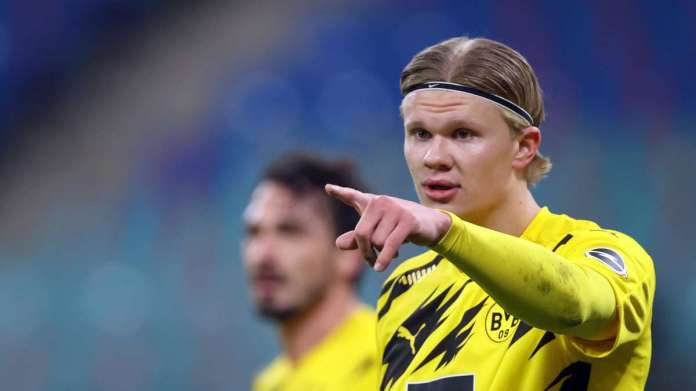 Erling Haaland still has a contract with Borussia Dortmund until 2024, but at BVB nobody expects the striker to stay that long. He’s probably not drawn to FC Bayern.

Munich – Borussia Dortmund is slowly but surely getting back on track under Edin Terzic. In the Bundesliga things are going well again and only on Tuesday evening did the black and yellow knock out the other Borussia from Mönchengladbach together with the future BVB coach Marco Rose in the cup quarter-finals.

The Dortmund team is three points behind in fourth place in the league. This place would be important for BVB to start in the Champions League in the coming season. This in turn would be of enormous importance for talented BVB kickers. Because a season without the premier class would probably not be realistic for players like Erling Haaland or Jadon Sancho.

While Sancho will probably leave Signal-Iduna-Park for England this summer, Haaland definitely wants to wear black and yellow for another year. His exit clause will not take effect until 2022 anyway. But it is around 100 million euros!

“Only a maximum of ten clubs can afford to buy Haaland and give it the platform when you have been to Dortmund,” says his advisor Mino Raiola. Allegedly, only six teams come into question for Haaland himself. Real Madrid, FC Barcelona, ​​Juventus Turin, Manchester United, Manchester City and Liverpool FC.

And what about FC Bayern? On the one hand, they don’t deal with the Haaland personnel there, because they have a Robert Lewandowski. On the other hand, the German record champions have never been an option for Raiola to accommodate his protégés there.

A move to Manchester City or Real Madrid, whichever they do, seems more realistic Sports picture supposed. With the Citizens, Haaland could make another jump under Pep Guardiola. In addition, a successor to Sergio Agüero (33) will be sought there by 2022 at the latest, whose contract will expire this summer, but may be extended by another year. Haaland’s father, Alf-Inge, also played at ManCity from 2000 to 2003.

Los Blancos are also looking for a new striker, as Karim Benzema (33) cannot take photos there forever. Fitting that the Frenchman’s contract expires in 2022. Real would fit much better with Raiola’s ideas.

But that is all still a long way off. First of all, it is important for BVB to qualify for the Champions League next season. A win at FC Bayern on Saturday would not be entirely unimportant. Erling Haaland could make a not inconsiderable contribution to this. (smk)

Influence of the environment on happiness – birds are as edifying...