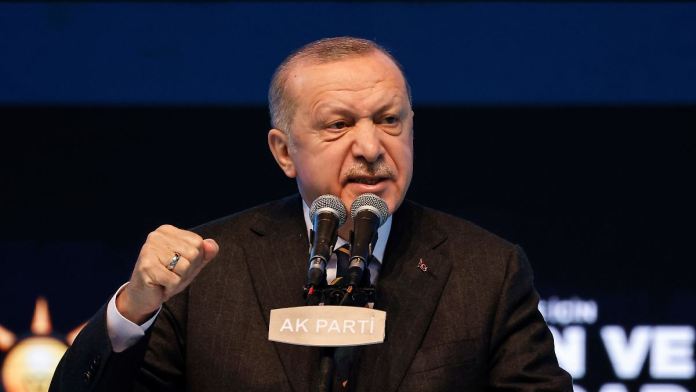 EU is watching
Panicked Erdogan wants to save his majority

The Turkish President Erdogan initiates a party ban, declares Turkey’s withdrawal from the protection agreement for women and throws his central bank chief out. And the European Union is offering him an expansion of the customs union.
A hundred police officers came to get MP Ömer Faruk Gergerlioglu out of parliament. The human rights activist was still in his pajamas at morning prayers when officials forcibly removed him from the building in Ankara. Gergerlioglu had holed up in parliament after his mandate was revoked and his immunity was lifted.

The doctor and politician, who was elected to the Turkish parliament for the pro-Kurdish HDP in 2018, retweeted a text from a PKK official in 2016. For this he was sentenced to two and a half years in prison. “I will resist this coup, the will of the people cannot be trampled underfoot,” tweeted Gergerlioglu immediately after his immunity was withdrawn. “Wanting peace cannot be a crime.” After an interrogation, Gergerlioglu was released last Sunday – he has lodged a complaint with the constitutional court against the prison sentence.

The action against Gergerlioglu is part of a campaign. On March 2nd, President Recep Tayyip Erdogan presented an “Action Plan for Human Rights”. Two weeks later, aggressive domestic political steps followed, revealing the simple friend-foe thought pattern of a panicked president. A few hours after Gergerlioglu’s immunity was withdrawn on March 17, it became known that the Attorney General’s office had submitted an application to the Constitutional Court to ban HDP. Turkey left the Istanbul Convention on the Protection of Women from Male Violence on Saturday. Then on Sunday the news that Erdogan has kicked out the third central bank chief since 2019. Former finance minister Naci Agbal was only in office for four months; he had raised the key interest rate without Erdogan’s approval. The new man at the helm of the central bank is Sahap Kavcioglu, an AKP MP who writes an economic column in the Islamist newspaper Yeni Safak.

Ban on parties as a political instrument

The events of the past few days show how much Erdogan is under pressure: He and his ultra-nationalist coalition partner, the MHP, want to prevent the HDP from running in the parliamentary elections in 2023. Because the constitutional court is now controlled by the government, the HDP resolution is realistic. In addition, a total of 687 HDP officials are to be banned from politics for five years. The third largest opposition party is the parliamentary arm of the PKK, which is banned as a terrorist organization, so the charge. “The party did not take sides with Turkey on any national problem, but always found itself on the opposite side,” says the indictment. A political ban on Naciye Cigdem Atalay has also been called for. The HDP politician died in 2018.

The European Union and the USA have sharply criticized the ban procedure. A spokesman for the Foreign Office in Berlin questioned its proportionality, but also demanded that the HDP “clearly distinguish itself from the PKK, which is also listed as a terrorist organization in the EU”. The left-wing member of the Bundestag Sevim Dagdelen accused the federal government of chumbling with Erdogan. She explained that the terrorist allegations against the HDP were “outrageous and absurd.” In fact, the party also has supporters of the underground organization, but the HDP has been campaigning for a peaceful solution to the Kurdish conflict for years.

Above all, however, the HDP is partly responsible for the fact that Erdogan’s AKP has not been able to win an absolute majority since the 2015 parliamentary elections. Because of this, around 50 of its 65 mayors have been dismissed in recent years and the former party leadership and hundreds of its functionaries have been arrested. But despite the stigmatization as a “terrorist organization”, the HDP came to around twelve percent in the 2018 parliamentary elections. In order to prevent a successor party from building on this success after the ban, the public prosecutor also applied for the party’s assets to be confiscated. HDP politicians have already announced resistance to the government’s plans. “Nobody can make decisions that affect our future. One goes, thousands come,” said HDP co-chair Pervin Buldan in Istanbul.

Party bans are a common political means in Turkey to get rid of competitors, at least for a short time. In the past, this mostly concerned pro-Kurdish parties, of which around a dozen have been banned in the past few decades, which has always been followed by new foundations. An AKP ban was also discussed in 2008. The once Kemalist judiciary accused the ruling party of “anti-secular activities”. The request for a ban was rejected by the Constitutional Court with a narrow result. It did not harm the Erdogan party: after the ban procedure, the AKP even won more votes.

The withdrawal from the Istanbul Convention was also deliberately planned. Surveys show that the AKP-MHP alliance is on a downward trend, in new elections it could lose its parliamentary majority. Erdogan’s aim is to win back the votes of the conservatives. The AKP and MHP rely on a traditional division of roles between men and women, the international binding agreement from 2011 was controversially discussed within the two parties and was considered to be an obstacle to their own idea of ​​patriarchal family structures. According to Turkish media reports, 77 women fell victim to domestic violence this year alone. Reports of honor killings, forced marriages and child marriages can be read almost every day.

Erdogan can overlook the fact that the HDP has announced resistance, that thousands of Turkish women across the country have demonstrated against their defenselessness, that the Turkish lira has sunk by 17 percent at times and that there is also great outrage from the European side about all these steps. There was also criticism of the Turkish government’s approach at the virtual EU summit on Thursday. But it was completely without consequences. Because of the easing of the natural gas dispute, Ankara was even offered the prospect of a closer partnership. “In view of the differences of opinion that exist, and in some cases deep differences of opinion, we believe that speechlessness is still not an answer,” said Chancellor Angela Merkel after the summit.

Erdogan has nothing to fear from the EU. So far, all political threats, warnings or requests from Brussels have come to nothing. Erdogan can also drive the Europeans in front of him because of the refugee agreement. The EU-Turkey declaration is now five years old and has proven itself, said Merkel. “It has reduced illegal migration. It has made it more difficult for people smugglers to work. Above all, it has helped many, many refugees.” The agreement has also helped the EU. The summit promised Turkey “to remove the current difficulties in implementing the customs union”. Officially, of course, this has nothing to do with the refugee agreement. In any case, the AKP sees itself on track in its historic mission. “It took 19 years to complete our preparations. Now we’re just getting started,” threatened AKP deputy chairman Mahir Ünal.

In a racing suit for the first time: Hirscher comeback? ...

Nintendo Switch Pro: This is how powerful the new console should... The top match between RB Leipzig and FC Bayern is on...