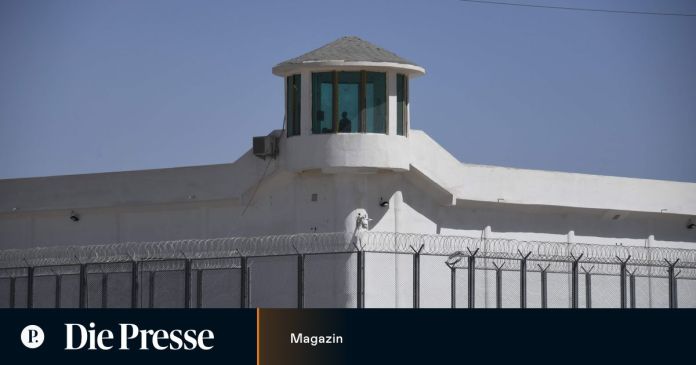 Adrian Zenz is something of an enemy of the state in China, he has been on a Chinese sanctions list since Monday. The Uyghur expert speaks about the mistakes Europeans make in dealing with Beijing, his research on the Muslim minority and the question of whether Angela Merkel is still naive or already bold.

For a long time, the Muslim Uyghur minority in China was probably only known to a few experts. Now it has come into focus: the Chinese regime is accused of brutally suppressing and exploiting the roughly ten million Uyghurs in the country. Several Western nations speak of a “genocide”, the Olympic Games in Beijing 2020 could be boycotted. On Monday, the EU imposed new sanctions against China for the first time since 1989 because of the Uyghurs.

Adrian Zenz, 47, is an anthropologist and the world’s best-known Uighur researcher. His research uncovered the extent of the system that Beijing established in the Uyghur areas in the west of the country. “Die Presse” reached the native German on Monday by phone in his adopted home, the US state of Minnesota.

Die Presse: Mr. Zenz, since Monday you have been on a sanctions list of the Chinese government, which is intended as a return coach to the EU. What did you think when you found out you were on the list?

Adrian Zenz: That surprised me a bit. I’m a German citizen and a European, so it’s objectively logical. But the Chinese have been trying for years to portray me as a kind of henchman for the Americans. They compromised this scam somewhat.

Are you also surprised that you are so important to the Chinese regime?

Look for my name in the press releases from the Chinese Ministry of Foreign Affairs and I am mentioned almost 500 times. That is two and a half times as much as the name Liu Xiaobo (the Chinese dissident and Nobel Peace Prize winner, note) or the name Joshua Wong (the Hong Kong democracy activist, note). I’ve become my own category.

Beijing calls you either on various online channels as a “liar”, “right-wing extremist” or points out your belief as a born again Christian.

In the age of disinformation, social media has grown in power. You have to come to terms with that. My work is dangerous for the Chinese because it has provided empirical evidence of what the Communist Party (CP) is doing in Xinjiang. Since she could not act against the data and her own documents, she shoots at me. My positions are conservative, if not consistently. It is of course utter nonsense to portray myself as right-wing extremist. The regime does not understand that a large part of Western society sees such a thing as nonsense.

Can you imagine yourself being threatened physically at one point or another?

This is not how the Chinese typically act. If it were Russia, one would have to expect more. However, it is not beneficial for the Chinese government to target me by name and then attack me physically. On the other hand, the Chinese propaganda against me has become so ridiculous that nothing can be ruled out. My family has taken a number of personal safety precautions, but out of caution I don’t want to comment on them.

Let us come to your work, which first caught the attention of Beijing. They have estimated that there are a million Uyghurs in camps. How do you come up with this number?

Financial assets in Germany as high as never before due to...

Concern about new technology: does the mRNA vaccine change our genetic...

Google annual review: Germany searched for this in 2020 First day in lockdown – the army rehearses the emergency in...