They agreed on Thursday to use ten million additional doses of doses from Biontech / Pfizer to make up for existing differences in distribution. Austria could also benefit from this. Federal Chancellor Sebastian Kurz (ÖVP) was “happy, relieved and satisfied”.

“We have worked hard for a fairer delivery of vaccines in the European Union,” said the Chancellor according to the broadcast. “After numerous states have spoken out in favor of more justice and solidarity, there was a joint decision that the ten million additional doses of vaccine would result in a fairer delivery of vaccines in the EU in the second quarter.” From now on, the detailed implementation will be carried out by the EU ambassadors and no longer by the Steering Board. Briefly, EU Council President Charles Michel thanked the Portuguese Council President Antonio Costa and Commission President Ursula von der Leyen for their efforts to find a good solution for everyone.

“Fair solution within the framework of solidarity”

According to the dpa, the German Chancellor Angela Merkel said after the summit that, after long discussions among the heads of state and government, the Council of Ambassadors had been commissioned to find a “fair solution within the framework of solidarity”. “As always, this is a relatively complicated task, like squaring the circle.”

A solution is to be found on the basis of the population share of the EU states and the delivery speed in the distribution of ten million additional doses of Biontech / Pfizer, it said on Thursday in council circles. Accordingly, the EU summit confirmed a distribution according to the population key.

Germany, on the other hand, has argued that the imbalances arose because individual countries did not order all the cans on offer and they were bought up by others. Denmark, Sweden and the Netherlands also opposed a correction mechanism, it said. EU Commission President Ursula von der Leyen had also suggested using the ten million doses of the vaccine from Biontech / Pfizer, which will now be delivered early in the second quarter, for compensation.

Thus, the EU ambassadors should solve the conflict and not the steering committee, whose co-chair Clemens Martin Auer had to withdraw because of the cause. The EU ambassadors are bound by instructions to their capitals and should decide unanimously.

Kurz had recently indicated that Austria could receive around 400,000 missing doses by the summer as part of the correction. According to the population key, only 200,000 of these Biontech cans would be in Austria.

The EU summit also supported the tightened export controls for corona vaccines introduced by the EU Commission. According to Reuters, Merkel said that export restrictions would become “more likely” in the future if companies fail to adhere to their contracts with the EU. In addition, one will in future look more closely at how high the vaccination rate is in a country that is to receive vaccines produced in the EU. Then the question will not be whether, but when this state will get the vaccines. French President Emmanuel Macron also welcomed the new export regime approved at the EU summit. Macron denied British allegations of selfish attitudes. The opposite is the case.

US President Joe Biden tuned in on Thursday evening at the video summit of EU heads of state and government. Biden wanted to give a short address to restart the transatlantic relationship. It is the declared goal of the US President to work together with Europe in the fight against the corona pandemic and against global warming and to strengthen mutual trade relations.

“Today we had a good exchange with US President Joe Biden about common challenges such as the COVID-19 pandemic and climate change. Especially in difficult times like these, a strong transatlantic partnership is needed,” said Kurz.

Corona vaccination in the north: the first dates have been set

Aylin Tezel: You should listen to your inner voice 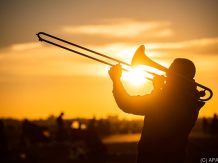 Politics in Bavaria: Castling in the Ministry of Health – Bavaria