Munich threatens to end the EURO – but Bayern want to fight.

“Munich’s withdrawal was and is not an issue,” replied the city’s organizers brusquely on Wednesday afternoon to the latest announcement from the European Football Union (UEFA). Its president, Aleksander Ceferin, had previously increased the pressure on the host cities in a manorial manner by demanding a spectator guarantee.

“Every organizer has to guarantee that fans are allowed to attend the games,” said Ceferin: “The option of any game in the European Championship being played without fans is off the table.”

Host cities have to declare themselves to UEFA

To SID-The twelve host cities must submit information to UEFA by 7 April regarding the audience issue. The decision on the format of the final round (June 11 to July 11), which is to be held as a pan-European tournament for the first time, will probably be made at the UEFA Congress on April 20 at the earliest.

“The ideal variant is to play in all twelve countries. But it is possible that the tournament will be played in ten or eleven countries if some countries do not meet the requirements,” said Ceferin about the European Championship, which will take place on March 17, 2020 had been postponed by one year due to the corona pandemic. Munich, Amsterdam, Baku, Bilbao, Budapest, Bucharest, Dublin, Glasgow, Copenhagen, Rome, St. Petersburg and London are the planned hosts.

Recently, there has been constant speculation about which cities could be deleted. It was mostly about Baku, Dublin, Bilbao and Glasgow. In addition, there are rumors that a large part of the games will take place in Great Britain. This assumption is obvious because the vaccinations are already well advanced on the island – which could enable spectators in the stadiums.

According to the UEFA plans, the group matches of the German national team against France (June 15), Portugal (June 19) and Hungary (June 23) as well as a quarter-finals are to be played in Munich. Mayor Dieter Reiter was correspondingly irritated by the Ceferin statements.

“At this point in time, it is simply not possible to make a statement as to whether the coronavirus pandemic will allow spectators to be admitted in June or not. However, it is clear that events of this type with spectators are not permitted under the current regulations “, said the SPD politician:” In these times in particular, I would like the people in charge at UEFA to seek direct exchange with the host cities in order to work out a solution together. ”

In order to meet the requirements of UEFA, a special regulation on the part of politics would be needed. In view of the increasing number of cases and much more pressing problems, it is doubtful whether such an “extra sausage” would find acceptance in the population.

The chairwoman of the sports committee of the Bundestag made it unmistakably clear what Dagmar Freitag thinks of the UEFA conditions.

“In view of the pandemic-related challenges that the twelve host countries still have to face, UEFA’s demand is ignorant and irresponsible, but it is anything but surprising to me,” Friday said SID: “It just documents once more the hubris prevailing there and shows once again how far the parallel world of football has moved away from the current reality of our societies.”

In view of the time pressure, the topic would have to be discussed at the federal-state consultations on Monday – the item “events” is on the agenda after all. Nevertheless, a final round with spectators across the continent seems unthinkable, as travel is seen by all experts as the driver of the pandemic. The restrictions currently in force in many countries would make it largely impossible for fans to cross borders anyway.

Everything about Bayern’s appearance against Lazio in the Fantalk with Stefan Effenberg, Mario Basler and Olaf Thon on Wednesday from 8.15 p.m. live on SPORT1

The German Football Association (DFB) told SID that it would continue to work on all scenarios. “In the interests of the fans, we would like to fulfill the vision that spectators can also attend the EURO 2020 games in Munich under the applicable provisions,” it said in a statement. The association left it open whether this is feasible. In the further discussions it should be discussed “whether and how the implementation of these goals can succeed”.

What UEFA is up to in their plans is an open secret. Before the pandemic, the association had expected around two billion euros in revenue from the EM. With this calculation, ticket sales account for almost a quarter of the proceeds.

Experts: No evidence of anti-corona effects of vitamin D.

Attack in Vienna: “Blatant failures of the protection of the constitution” 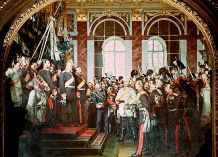 How Berliners reacted to German unification in 1871

Season 4 of “Fortnite” ends with a galactic bang

Airbus and Hensoldt: Bizarre dispute about “night owls” made in Germany