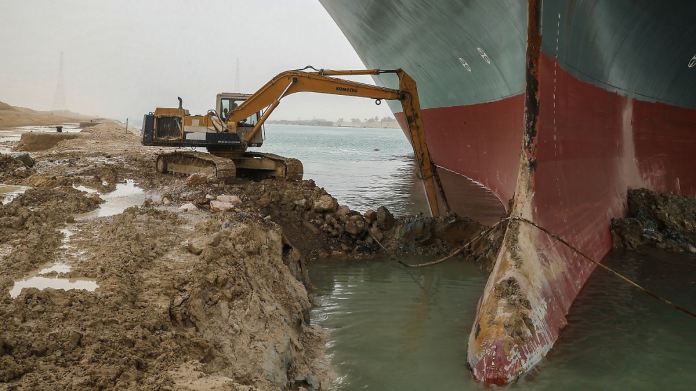 The container ship “Ever Given” blocks the Suez Canal for almost a week. There is no getting past the big ship on Twitter either. There he is preferably accompanied by a small excavator. The two land – apart from the serious situation – a real Internet hit.
After the Suez Canal was blocked for almost a week, the aground container ship “Ever Given” is at least partially exposed again. While the shipping world is taking a deep breath, the Internet is about to lose one of its shooting stars. In the past few days, the 400-meter-long giant container had generated countless laughs and likes. The hashtag SuezBlocked on Twitter caused a real storm of memes – pictures with funny comments.

The hero of the rescue operation was the tirelessly fighting driver of an excavator who was apparently trying to dig the huge ship free with a tiny shovel. Users wished to have as much self-confidence as he did and wanted to declare him “Person of the Year”.

Others saw parallels to the corona pandemic in the blockade by the ship: The federal and state governments could learn something from the ship’s captain – namely, how to bring about a consistent lockdown, tweeted the NDR satirical magazine “Extra 3”. The current corona measures are more like the tiny excavator that wants to uncover the huge corona pandemic ship, wrote others.

And how can the blockade be resolved if the rescue attempts do not lead to success? Here, too, users were creative: Simply unload the containers and build pyramids from them, some said – after all, they would fit into the Egyptian landscape.

An alleged phallus pattern that the ship’s captain is said to have driven into the sea before the accident also caused amusement.

Experts consider it impossible that he intentionally wanted to make people laugh. With a 400-meter-long ship, that would be an impossibility, said the managing director of the Federal Association of Sea and Harbor Pilots, Uwe Jepsen.

Canton of Bern has to reassess the elevation of the Grimsel...

Nintendo Switch Lite: In a bundle with Mario Kart at Media...

Kimi Raikkonen-Alfa Romeo is on fire, post from the fire brigade...