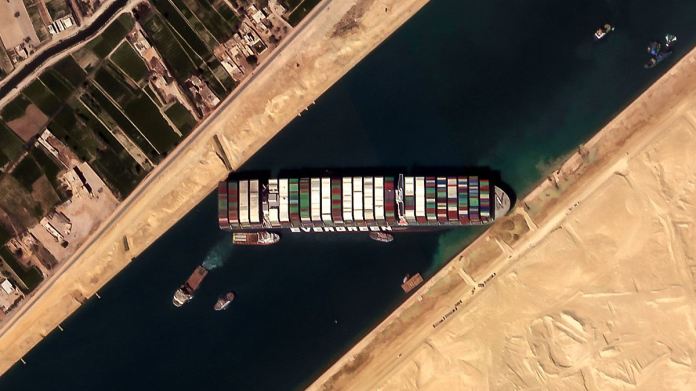 The Suez Canal, one of the most important waterways in the world, is still blocked: But the owner of the stuck container ship “Ever Given” hopes that the drama will soon end. The giant should pick up speed again this weekend. Technically everything is fine with him.
The owner of the container ship “Ever Given”, which is stuck in the Suez Canal, is hoping to rescue the freighter on Saturday. There are no indications that the ship’s engines have been damaged, said the head of the Japanese company Shoei Kisen, Yukito Higaki, according to Japanese media reports at a press conference on Friday. The aim of his company is to “free” the giant container of the Taiwanese shipping company Evergreen on Saturday evening Japanese time.

No water got into the “Ever Given”. There are also no problems with his rudder or the propellers. “As soon as it moves again, it should be operational,” Higaki said, according to the Asahi Shimbun newspaper. Work on removing sediment under the bow continued, he stressed. “Additional dredging equipment” would also be used.

The 400-meter-long and over 220,000-tonne container ship “Ever Given” went off course in a sandstorm and ran aground near the banks of the Suez Canal. Since then, it has blocked the waterway between the Red Sea and the Mediterranean, and all ships in it cannot continue. Efforts on site to get the ship free have been in full swing since Wednesday. It is feared that the rescue work could drag on for weeks.

Another attempt to free the ship from its deadlocked position had failed on Friday. According to the Singapore-based company Bernhard Schulte Shipmanagement (BSM), who is responsible for the technical management of the container ship, two more tugs are expected in the Suez Canal on Sunday to help with the rescue. Most recently, more than 200 ships have been stowed on both sides of the canal. German companies also fear delivery bottlenecks.

The US government had meanwhile declared its readiness to participate in the rescue of the “Ever Given”. “We have equipment and capacities that most countries do not have. We will see how we can help here,” US President Joe Biden told reporters. A government official said the Navy was ready to send a team of dredgers to the canal but was awaiting approval from local authorities.

Thomas Gottschalk’s “DSDS” appearance could pay off for Dieter Bohlen

After the death of three-year-old in the Rems: public prosecutor’s office...