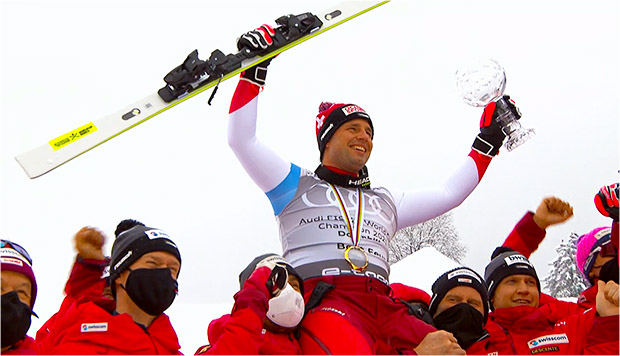 Beat Feuz: “Every ball is very important – but four times in a row makes this downhill ball special.”

Beat Feuz: “Every ball is very important – but four times in a row makes this downhill ball special.”

In the men’s speed category, the little downhill ball went to Swiss Beat Feuz again. For the fourth time in a row, the 34-year-old secured the coveted downhill crystal. The Emmentaler has thus set Franz Klammer’s record (1974/75 to 1977/78), but the Austrian collected a total of five discipline balls.

Feuz won two races in the 2020/21 Ski World Cup season. The Swiss triumphed at the Hahnenkamm race in Kitzbühel on January 22nd and 24th, 2021. Feuz was on the podium in the last four downhill runs in the World Cup. After his double success in Kitzbühel, Feuz also finished second in Garmisch-Partenkirchen (February 5) and Saalbach-Hinterglemm (March 6).

Since a 13th place in Aspen on March 15, 2017, Feuz has finished each of his last 33 downhill races in the World Cup within the top 10. Regardless of the results of his opponents, Feuz would certainly have won the crystal ball in the last race if he had classified within the top 8.

Beat Feuz im ORF Interview: “Sure, every ball is very important, but four times in a row, as you can see from the statistics I saw with you, the win is even more special. The chance that I will catch up with Franz Klammer is intact, but you always have to be well prepared. But next year is another season and the others aren’t sleeping either. This season you already have a Vincent Kriechmayr or Matthias Mayer, they are always on the lookout. If you fail or make any mistake, they are there and a bullet is gone very quickly. It is important to be well prepared and fit. It is only possible if you can compete in the races in a healthy manner and without complications. A lot has to go together, you don’t get anything for free. ”

New company cars: These luxury cars were chosen by the Real...

After passenger break-in – the airport puts plans for a third...

“Caterina, the big one” celebrates 90: Valente: Did what I wanted