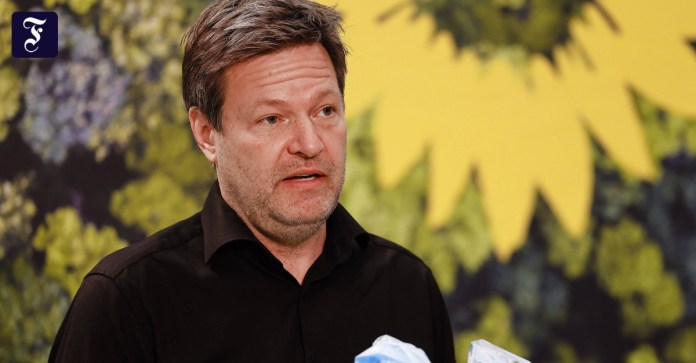 GRünen boss Robert Habeck has once again strongly criticized the federal government’s policy in combating the corona pandemic. “Every district association of the Greens is now better managed than this country,” said Habeck on Saturday at a state party conference in Kiel. His party wants to end the lack of ideas at the federal level. The country needs new answers. Schleswig-Holstein’s Greens are aiming for first place in the federal election. At the top of the state list are the Bundestag member Luise Amtsberg and party leader Robert Habeck.

Habeck did not want to comment on the chancellor question in Kiel. He spoke of “intimate conversations” with co-chair Annalena Baerbock. The country has other problems with the corona pandemic than the question of who will be the Greens’ candidate for chancellor.

Habeck does not consider it fruitful to speculate about constellations at the federal level. “You can now see that the party landscape is in complete turmoil.” Just a few weeks ago, he was confronted with the question of under which Chancellor of the Union his party wanted to govern. Now the focus is on the traffic lights. But it is only a matter of snapshots.

Habeck also wants to withdraw the direct mandate from the CDU Bundestag member Petra Nicolaisen in the Flensburg-Schleswig constituency. Fiscal policy should not put “debts in the books above debts in reality,” said Habeck. Germany must invest more. Other countries put twice as much money into education. Politics shouldn’t be measured against plans, but rather against the results.

“We fight for one”

Habeck’s party colleague Amtsberg received 110 yes-votes from 122 delegates when she ran for position 1 on the list, Habeck received 107 yes-votes for second place. Members of the Bundestag Ingrid Nestle (3rd place) and Konstantin von Notz (4th place) want to defend their mandates in the election on September 26th. In fifth place on the list follows the Dithmarsch district chairwoman Denise Loop. She won against Meike Witte from Kiel. Among the five applicants for sixth place on the list, the Lübeck parliamentary group leader Bruno Hönel ultimately prevailed against the climate activist Jakob Blasel.

“This year must be the year in which we Greens take responsibility in the federal government,” said top candidate Amtsberg. The general election is not about black and green. “This election is about green versus black. We’re fighting for one. “

The Greens state chairman Ann-Kathrin Tranziska spoke of a directional decision. According to surveys and recent elections, your party is doing better than it was in the 2017 federal election. “So it is not cheeky to think that we will be able to participate in the government again after this federal election.”

The social climate has suffered a lot and solidarity is required in the Corona crisis, said Tranziska. The pandemic management must take people’s worries into account. The instrument of the Prime Minister’s Conference should be replaced by parliamentary resolutions in the Bundestag and Bundesrat. The corona crisis proves that politics can have power. However, it should not “hang on to old patterns”.

In the 2019 European elections, the North Greens succeeded for the first time in taking first place in an election nationwide. At that time, they won with 29.1 percent of the votes ahead of Prime Minister Daniel Günther’s CDU with 26.2 percent and the SPD with 17.1 percent. For the federal election on September 26th, they hope to double their current three mandates.

The party congress took place in the so-called hybrid format. Some candidates like Habeck and Amtsberg gave their speeches on site. Other candidates and the delegates participated via the internet.

City administration in Corona mode: 1000 more notebooks are also not...

Nuremberg Mayor King: ban on firecrackers for Germany called for

After the earthquake off New Zealand: tsunami warning for the Pacific...

DSDS (RTL): Most annoying candidate ever makes haters on the net...

First information about the cooperation between AEW and Impact Wrestling –...

Phil Spencer talks about the postponement of the release