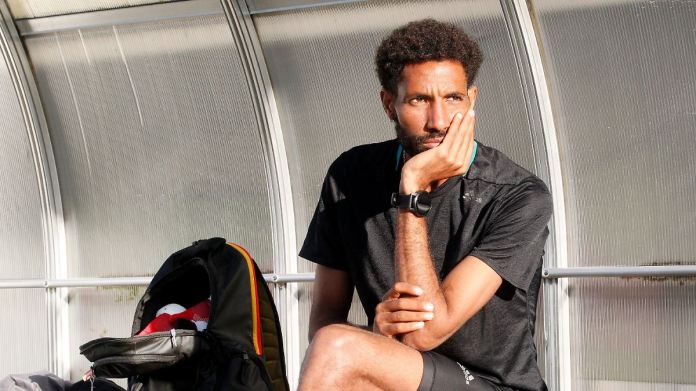 Soldiers now sit where his apartment used to be. Amanal Petros is the German hope for the marathon in Tokyo, but his concerns are completely different. His family was missing for months. She can now be reached again. But far from safe.
Nightmares and fears for his family, but also new hopes for a reunion and a happy ending: a good four months before the Olympics, Japan is still a long way off for Germany’s marathon record holder Amanal Petros. But he is very close to his mother and the two younger sisters every day – even if only in his mind. “You are right on the Ethiopian-Sudanese border in a village. I have not been able to reach you to this day, there is no way I can visit you, but I now know where you are. That is better than nothing,” said Petros, relieved and worried at the same time.

For months, the 25-year-old had no idea where his family was – the women were lost in the chaos of war. Now he has found her and is in indirect contact through a good friend from Mekele, the capital of the war region Tigray. “There is no way I can go there. Everything is terrible in Tigray, everything is broken. The war is still raging,” says Petros. “We no longer have any hospitals, no clinics, no pharmacy, not a single factory. Everything destroyed, everything burned, zero.”

The situation in his Ethiopian homeland is an enormous burden for the fastest German marathon runner, who improved the five-year-old German record to 2:07:18 hours in Valencia on December 6th. “That is brutally hard! Sometimes you sleep very badly and dream badly. That burdens me brutally – in any case,” says the athlete from TV Wattenscheid 01.

His next goal is clear. “I absolutely have to bring them to Sudan – they are definitely safer there than now,” said Amanal Petros. Escape across the border, however, is the only solution. “But that is very dangerous, really scary. Many women have already been raped. I am now looking for a safe solution with as little risk as possible,” says the Eritrea-born man who grew up in Ethiopia and who came as a refugee from Tigray in January 2012 Germany came.

Since then, the sports soldier has only been able to go to Ethiopia once, after the European Athletics Championships in 2018, to visit his family. A photo of the house in Wukro has now been leaked to him. A shock! “There are soldiers sitting in front of them with a machine gun. That’s really bad – it’s only 25 meters from our previous apartment.”

His friend from Mekele drives to the women once a week, that’s 42 kilometers. “And then he tells me what my family needs, what they say, what the situation is like,” reports Petros. Telephone contact is impossible. He can only guess how his loved ones are really doing. “They tell me: We are fine. Even if they were sick …” He can already feel “that I am a hope for them because I am safe”.

And therefore can also do sports. From March 3rd to 19th, Petros was in a training camp in Kenya. Last Sunday he ran the personal best in the half marathon in Dresden. “That was mega-windy and very cold – a temperature drop from 27 to 3 degrees! A bit strange,” he says.

The hope of seeing you again is a huge motivation for the young man with the deeply dark eyes. Even in sports. “If things get better at home one day, then maybe you can return home,” says Petros, “or to another safe place.” To Germany? “Maybe.”

Dortmund only mediocre: BVB has to worry about Europe

Start of construction in spring: LASK received approval for a new...

Waved through: TUI shares give way: State can invest in TUI...

In the event of bankruptcy, faster debt relief is possible