Your own ambitions for world domination begin with the selection of the “nasty genius”, as the German version calls it, whereby the super villains could come from spy films or exaggerated persiflage like Austin Powers. The rogue quartet includes the large side table, Maximilian, who has a special preference for gold and acts as an all-rounder. As a crazy super fighter, the red Ivan relies on the muscular strength of his henchmen and can command more combat henchmen. If you choose him, opposing agents will primarily be received with the fist. Then there is the brilliant scientist Zalika, who can use her aura to repair objects while her research minions discover more effective technologies. Last but not least, there is Emma on her throne with mechanical spider legs. Compared to her three colleagues, her deception methods are more effective and she can reduce suspicion better, which means that the agents do not become aware of her machinations as quickly.

The vault is full of gold. The research is on. And there are currently no agents on the way …

The playstyle of the super villains differs mainly in the servants’ focus on combat, research or deception, especially since every genius comes with his own doomsday machine, which you get to know in their campaign. Still, a little more differences would have been desirable, as the basic gameplay is quite similar. After all, after choosing the villain, you can choose between three paradisiacal domiciles – sometimes with more space for multi-story expansion or with gold veins in the basement, while a casino always forms the harmless facade as a distraction. There are no other deception companies. After choosing the villain and island, you set the level of difficulty.

As an alternative to the main game mode with its own campaign for each villain, there is a quick start option with Maximilian and the sandbox mode, in which the progress of the campaign and the technology enabled are irrelevant. By the way, in the super villain world there is no place for competitors, which is why there is no multiplayer mode and you don’t compete against another AI super villain.

A base as a power center 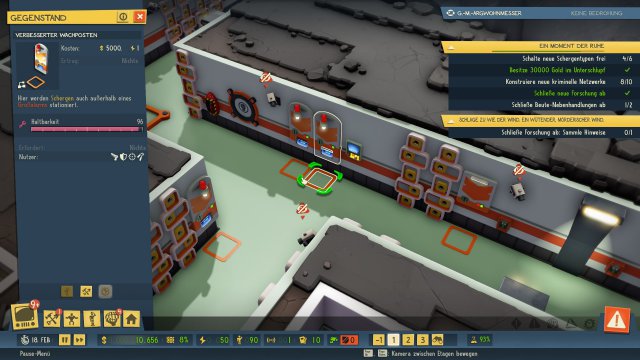 This “improved sentry post” for guards, which has to be filled permanently, is empty because the AI ​​henchmen are doing something else. “Normal sentries” are manned at red alert (bottom right), but the improved sentries should, according to the description, be manned outside of a high-level alarm.

Evil Genius 2 can be imagined as a strategic development and management game based on the model of Dungeon Keeper, Theme Hospital, Startopia or Two Point Hospital. So you build a multitude of rooms with special functions in your base. You determine the floor plan of the safe, barracks, training camp and Co., connect the room with the hallway and place the necessary furnishings that cost money and maybe need electricity. Decorative items such as air conditioners, coffee machines or particularly nasty seating can also be placed, of which only very few influence the effectiveness of employees in the immediate vicinity. After the room has been planned, the workers in yellow Minion color scurry up, knock the room into the rock and, with a bit of luck, take over their task.

You cannot control or command the henchmen directly. They take on their tasks independently, but want to have their distinct needs for sleep, food and “cleverness” taken care of – whereby it is striking how often they are away from their work and prefer to sleep or eat instead. Here it is advisable to keep the walking routes short. Nevertheless, as a super villain, you often want to get a lot of employees off the ground if, for whatever reason, they don’t do their job. There is an overview of all the minions and the possibility to select individual fields of work, but the options are not extensive and precise enough (e.g. no room allocation per minion). 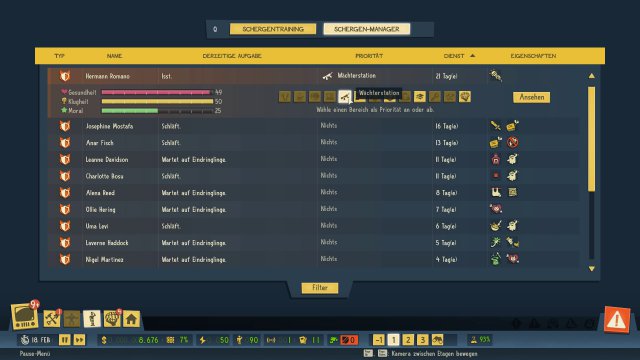 Tasks can only be specified in general and not precisely.

This is sometimes a pain in the ass when research is stalling again, guards are not manned or the security monitors are not being watched, so that enemy agents can scurry through the base, but no one feels responsible. With such powerlessness one would like to vent one’s anger on the henchman, which is also possible, but that is not really effective. That the super villain’s hands are tied because the minions are doing nonsense is annoying, although the developers have made clear improvements compared to the beta version from February.

You can only control the upper level with his two skills and recruited henchmen crooks who are usually not where they are needed.

Luge just missed the podium at the World Cup opener in...

Tinder and flirting in Corona times: These were the addicting tricks...