Did the coronavirus originate from a laboratory accident in China? Many people, including high-ranking politicians and scientists, believe this provocative claim.

Now there is a new, high profile proponent of this theory: Dr. Robert Redfield (69), under the then President Donald Trump (74) director of the US health authority CDC (Centers for Disease Control and Prevention, comparable to the German Robert Koch Institute)!

In an interview with the US news broadcaster CNN, Redfield said that in his opinion the virus did not arise naturally but “escaped” from a laboratory in Wuhan, China.

“Other people don’t believe that. That’s fine. Science will eventually find out, ”explained the virologist who ran the CDC at the time the pandemic in the US was at its peak.

► There is consensus among scientists and the World Health Organization (WHO) that the virus was transmitted from bats to humans through another animal.

“I just don’t think that makes biological sense,” added Redfield. However, he does not assume that China’s scientists have any intention of doing so. It is not uncommon for respiratory pathogens to infect a laboratory worker.

► SARS-CoV2 was first discovered in December 2019. Redfield, on the other hand, believes the pathogen was already in circulation in September or October 2019.

In February, the WHO sent a team of experts to Wuhan to investigate the origin of the virus. The team concluded that it was “extremely unlikely” that the virus came from a laboratory accident – and that it likely came from animals before it spreads to humans.

In Germany, too, many believe in laboratory theory. Most recently, the nanoscientist Roland Wiesendanger (University of Hamburg) caused a stir: in mid-February, he presented a study that was supposed to prove the origin of the virus in the high-security laboratory of the virological institute in Wuhan.

The professor received massive criticism for his studies, but the university management stood behind the scientist. Wiesendanger confirmed to BILD: “Corona came from a laboratory in Wuhan!”

In Tarbes: A third Airbus A380 is dismantled

Feuz and Co. intervene – the speed drivers start the season... 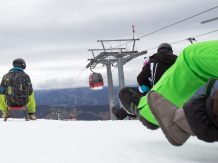 Distance rules not complied with: Tobogganing meadows on Semmering closed –...

Coronavirus in Germany: Greens want to oblige employers to work from...

No revenge! Gladbach lost against Inter