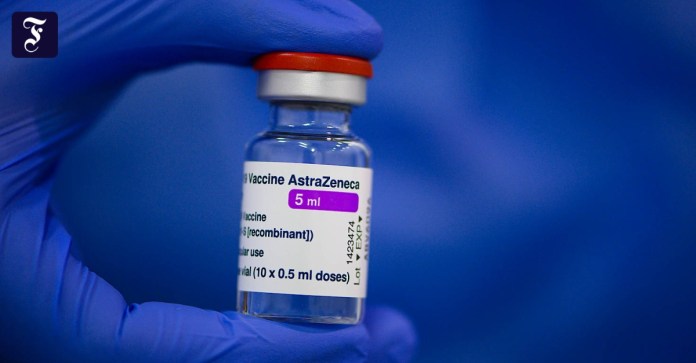 Dhe timing was certainly no coincidence: On the day on which the EU Commission presented its new rules for the approval of vaccine exports in Brussels, the Italian newspaper “La Stampa”, citing the French Internal Market Commissioner Thierry Breton, reported that the British-Swedish vaccine manufacturer Astra-Zeneca (AZ) stores almost 30 million Covid vaccine doses in a factory in Anagni south of Rome. A licensing company fills vaccines for AZ that are not produced in the EU.

The process is designed to further increase the already considerable outrage about the manufacturer. AZ has remained and remains significantly below the quantities stipulated in the supply contracts with the EU. The company announced several times that it could unfortunately not deliver as much as promised – however, it delivered to Great Britain by and large as much as agreed. The delivery promise to the EU originally amounted to 120 million cans by the end of March, at last it was 30 million – the same amount as detected by Commissioner Breton in Italy.

There and in Brussels the rumors shot up on Wednesday: Is the amount withheld intended for the United Kingdom, does AZ export vaccine produced in the EU to Britain again? Is Breton making sure that doesn’t happen – and is it imposing an export ban? Is the “vaccination war” between Brussels and London finally escalating?

Valdis Dombrovskis, the notoriously anti-climactic Vice President of the EU Commission, vehemently opposed this speculation. The new version of the rules for the registration and approval of vaccine exports, which have been in force since the end of January, do not contain an export ban, said the Latvian.

The company and the EU Commission also announced that the vaccine stored in Italy was not intended for export to Great Britain. More than half will be delivered to the EU, it said from the Brussels authority. According to AZ, 16 million cans are intended for the EU. This means that the delivery commitments for the first quarter would be fulfilled by the end of the month.

The rest go to developing countries as part of the Covax global vaccination program, in which the EU is also involved. The latter are currently in the final inspection before delivery. “Otherwise no export is currently planned.” In addition, the presentation was incorrect, it was a “warehouse” of vaccines that were “bunkered”, said AZ. The vaccine production is time consuming; Last but not least, careful quality control is required.

“The pistol put on the table”

The assumption that the stocks in Anagni could serve as the first application for the new EU export rules is therefore wrong: the larger part is not exported at all, the smaller part goes to countries that the EU wants to support. As reported, the new set of rules is primarily intended to provide more precise criteria for the approval of vaccine exports. This will continue to be decided on a case-by-case basis. According to this, the EU states, in cooperation with the Commission, should ensure that an export ban would be proportionate and meet the criterion of reciprocity.

A ban would be proportionate if a target country already has a higher vaccination quota than the EU. This would be a lever for possible export bans to Great Britain. The commission said that the rules did not create an obligation to restrict exports. The criterion of reciprocity relates to the question of whether a potential recipient country allows the export itself. The instrument continues to primarily serve transparency and is not generally aimed at banning exports, said Dombrovskis. He recalled that of 381 export applications so far, 380 had been approved.

A blunt sword is supposed to be the possibility to forbid the export, but also not. The commission has now “put the pistol on the table”, it said in the authority. Ideally, this would lead to partner countries such as Great Britain or the USA becoming more cooperative. “The EU is the only area in the world that exports to countries that manufacture vaccine themselves,” said Dombrovskis.

It is a matter of fairness that this imbalance be reduced. The Latvian added that a “distinction must be made between companies with poor performance and those with good performance”. This means that those manufacturers who, unlike Astra-Zeneca, comply with their delivery obligations are not affected.

Commission President Ursula von der Leyen wants to present the new rules to the EU heads of state and government at their video conference this Thursday. Most member states support a tougher course towards Great Britain. This is especially true for the Netherlands. In Halix, the Netherlands, a new AZ production facility is due to open soon. The Hague wants to prevent the vaccine produced there from being exported to Great Britain.

Apple is “leveling the playing field” with the iOS 14 privacy...