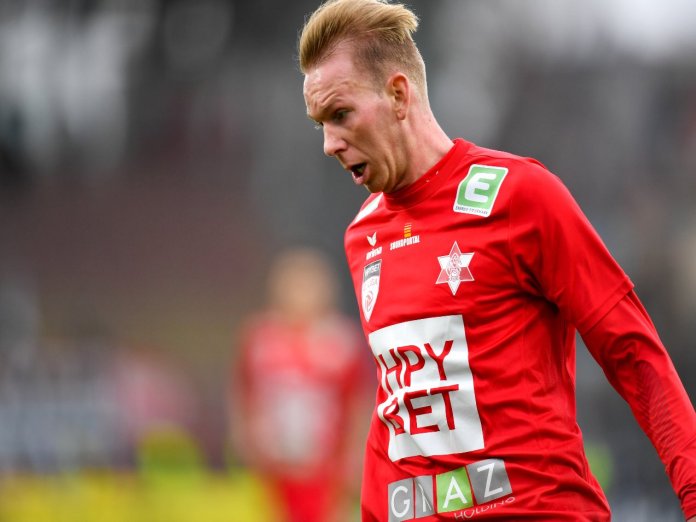 The GAK 1902 and SV Licht Loidl Lafnitz crossed blades in the Merkur Arena in Graz. The Friday evening game was also the top game of the 19th Hpybet 2nd league round and both teams did their utmost to live up to this top game. In a fast-paced and high-class game, two substitutes decided the match – first David Schloffer scored for Lafnitz and in the last second Martin Harrer equalized for the home side. Both teams can be satisfied with the 1-1 draw – the result corresponds exactly to the course of the game.

The encounter was held at high speed from the start. The league leaders pressed on very early – a tactic the hosts apparently hadn’t expected – you could tell that the GAK was initially having a hard time against the front runner. In the 5th minute there was an uproar for the first time – the guests from Lafnitz demanded a penalty. The Graz striker Petar Zubak hit the ball in his own penalty area with his hand, but referee Armin Untergasser did not whistle – the Grazer’s arm was apparently too far away from his body. In the 14th minute, Philipp Siegl from Lafnitz took off from about 17 meters. The ball got stuck and landed at Martin Krienzer. All of a sudden, the 21-year-old appeared completely alone in front of keeper Christoph Not. The goalkeeper of Graz thwarted the early leadership of the East Styrians with a beautiful parade. In minute 33, the red jackets had their first chance in this game. Dominik Hackinger took the game device down perfectly after a measure cross, but did not bring the ball into the goal of the guests from a few meters, as a defender was just able to deflect the shot to the corner. Only a minute later, Peter Tschernegg took heart and pulled from the second row – this shot was deflected slightly and therefore went very close to the goal. Neither team scored after 45 minutes – the first half ended 0-0.

After the restart in half two, the game seemed a bit disheveled because neither team was able to take command and both teams often lost the ball in the build-up phase. The two opponents also apparently didn’t want to take any unnecessary risk to avoid falling behind. In the 61st minute, Dominik Hackinger dribbled through the Lafnitz defense and handed over to Slobodan Mihajlovic in the opposing penalty area. He missed his chance – Lafnitz only clarified in a bumbling manner – and somehow Petar Zubak got the ball. The Croatian didn’t hit the round leather properly and pushed it over the crossbar. Now the red jackets got stronger and stronger and gradually took over the command on the field. Guest coach Phillip Semlic responded with a double swap and brought Patrick Bürger for Martin Krienzer and David Schloffer for Mario Kröpfl. A swap that paid off – with his first touch of the ball in this game, David Schloffer scored a goal. After a shot by Philipp Siegl, the Lafnitz striker dusted off and sank the ball into the mesh. The hosts did not give up and did everything they could to equalize. In the 92nd minute Josef Weberbauer withdrew and Andreas Zingl saved the lead of his team with a brilliant save. Apparently the Reds had tasted blood now – Martin Harrer made it 1: 1 in the 94th minute and helped his team to a point.

Voices for the game:

“The game was played very classy. Lafnitz was stronger in the first half, but we kept it compact. In the second half we got into the game better. The team showed great morale today and earned the point.”

“We checked our opponents in the first round, we just missed the goal. In the second half, the GAK adjusted to us better and then got into the game better. In the end they threw everything forward and were with us rewarded with the Lucky Punch. Our performance today was very good despite the late goal! “

Munich / Corona: On the trail of the virus variants: New...

Popular sport in Germany will be bundled in 2021 Relationship out: This is how the 30-day rule can help you...