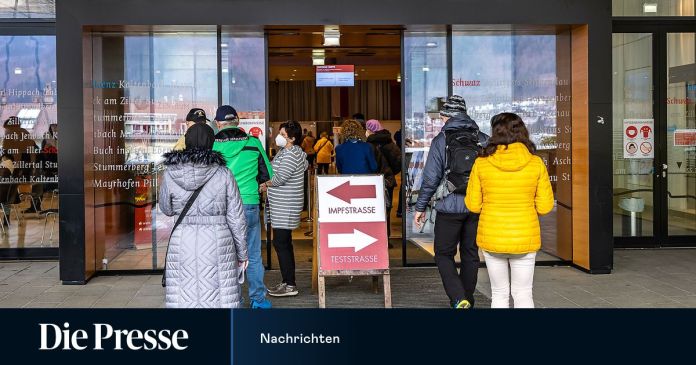 The reason is the current epidemiological situation and the increased incidence of the mutated British coronavirus variant. From Wednesday until April 14th, an exit test is mandatory for North Tyrol and the Kufstein district.

The compulsory departure test for the Schwaz district has been extended by a further week up to and including April 8 – due to the current epidemiological situation and the increased occurrence of the mutated British coronavirus variant. The country announced this on Tuesday. From Wednesday to April 14th, an exit test is also mandatory for the entire state of Tyrol – excluding East Tyrol – and the Kufstein district.

“In the Schwaz district, the number of corona cases can currently be kept more or less constant due to the strict contact tracing, among other things. However, we do not want to take any risks over the Easter holidays, which is why the compulsory departure test is being extended by one week,” explained Elmar Rizzoli, head of the Corona task force. There are currently 260 active-positive cases of this British variant with the so-called E484K addition in Tyrol. According to AGES, this virus variant has already appeared in other parts of Austria. According to current information, the two districts of Schwaz and Kufstein are mainly affected in Tyrol.

“At the request of the Ministry of Health, in addition to the compulsory exit test in the Schwaz district and the compulsory exit test planned for Wednesday in the Kufstein district, as an additional precautionary measure, we are also implementing a compulsory exit test from the state of Tyrol excluding East Tyrol,” said Rizzoli. The test obligation applies to people residing in Tyrol as well as to people who have been in Tyrol continuously for a period of more than 24 hours. People residing in Tyrol who commute from Tyrol are therefore covered by the obligation to test. The same rule applies to the Kufstein district.

Children up to the age of 10 and pupils for the purpose of taking part in lessons are exempt from the test requirement. The test obligations are randomly checked at the state borders or at the Kufstein district borders.

The test offer is to be expanded once again due to the compulsory departure test – also at the inner Austrian borders with Salzburg and Vorarlberg. A test station will be set up in Pettneu am Arlberg, and a test container at Pass Thurn. Mobile test buses are used in Hochfilzen and Waidring. Further information on the departure regulations for North Tyrol and the Kufstein district that will apply from Wednesday can be found at www.tirol.gv.at/ausreise

The biggest risk to the economy is a third wave –...

State against market economy in Germany

Pikmin 3 Deluxe in the test – added value with less...