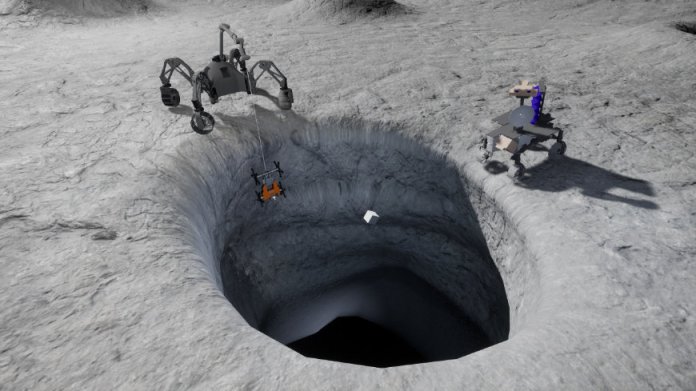 Lava caves on the moon are of great interest when it comes to finding suitable locations for long-term lunar missions. In order to investigate their potential for space travel, teams of autonomous robots could penetrate the caves in the future. A first test on the Canary Islands is currently being prepared as part of the “CoRob-X” project.

Teamwork pays off. This finding also applies in the world of robotics: During current space missions, it still relies on loners like the NASA rover
Perseverance In the future, teams of autonomous robots will explore the surfaces of the moon and Mars – and also penetrate underground. Because extreme environments such as the craters or lava caves of the moon are of interest for long-term missions – they can protect against radiation, meteorites and temperature fluctuations, for example, and offer water ice as a resource.

However, before a manned mission into the depths of the satellite is worthwhile, these promising places are to be examined by autonomous robots. The only question is: How do the systems get in and out of such lava caves? The solution offers an area of ​​Artificial Intelligence (AI) that is becoming an increasingly important component in the planning of future space missions: collaborative autonomous robotics. Compared to manned flights, exploration by intelligent robots not only saves effort and costs, but also risks for humans.

The ability to cooperate and make decisions is the decisive advantage for implementing complex mission scenarios such as exploring caves. For this reason, the European Commission is funding research into cooperative robots for extreme environments as part of the Horizon 2020 funding program. The “CoRob-X” project, coordinated by the German Research Center for Artificial Intelligence (DFKI), aims to implement such a scenario in an analogue mission on earth, and is funded for two years with around three million euros.

The long title “Cooperative Robots for Extreme Environments” hides one of the final projects of the Strategic Research Cluster (SRC) “Space Robotics Technologies”, which comprises several research projects for European space travel that were funded under the Horizon 2020 program. The focus of the “CoRob-X” project, which officially started on March 1, 2021, is accordingly on testing and validating the technologies that were developed in the SRC and are to be used in European space missions.

The exploration of lava caves is a realistic scenario, as these caves on the moon represent a key for long-term missions or even human habitats. For this reason, “CoRob-X” aims to carry out such an exploration using three autonomous robot systems in a field test in the Canary Islands and to prove its feasibility with the help of SRC technologies. Two systems from the Robotics Innovation Center (RIC) from DFKI in Bremen and a robot from the Belgian company Space Applications Services NV / SA are used.

Unlike those rovers that are already in use in space, these systems can make their own decisions thanks to artificial intelligence, which has many advantages over remote control by humans on earth: Autonomous space robots can react immediately to their environment, and new data to theirs Record mission planning and correct errors faster. The work in a team is ultimately crucial in order to be able to investigate an extreme environment such as a lava cave – whether on the moon or the volcanic Canary Islands.

For this purpose, an autonomous exploration robot is to be lowered into such a cave and brought back up again. The scenario envisages that the three autonomous rovers – SherpaTT and Coyote from DFKI and robots LUVMI from Space Applications Services from Belgium – together examine the entrance of a cave and through a sensor cube, the LUVMI
Throws into the so-called “Skylight”, collect and exchange initial information.

With the help of this data, the systems determine a suitable point at which the robust SherpaTT rover can lower the compact coyote using a cable pull. Once on the ground, the agile robot decouples itself from the rope and docking mechanism, explores the cave and then returns to the docking station to transmit the data and be transported up by SherpaTT. The field test for the validation of the SRC technologies is planned for the beginning of 2023. Until then, the mission details and requirements must be defined, the technologies implemented on the systems and any security issues taken into account.

At the same time, the company GMV Aerospace and Defense SA and the Santa Bárbara Foundation are carrying out another field test in a mine in northern Spain, in which the same technologies for exploring shafts are being tested. A rover and a drone from the Spanish GMV are used for this purpose. Other partners in the “CoRob-X” project, which is being funded with around three million euros over a period of 24 months, include Laboratoire Atmosphères, Milieux Observations Spatiales (LATMOS) and Magellium SAS from France, the University of Malaga, Sintef AS from Norway and Airbus Defense and Space GmbH from Germany.

“At the moment it doesn’t look rosy”: Biontech boss puzzles about...

Series of breakdowns does not stop – Oxygen problems on the... Health – Frankfurt am Main – Expert Holidays Advice: Those who...

High penalties for disregarding the quarantine

Oil prices under pressure due to economic worries