They are eerily beautiful pictures that excite an entire country. The volcano Fagradalsfjall in Iceland has been seething for more than a week and has spewed tons of lava into the landscape.

A natural spectacle that simply won’t get boring! Night after night, the inhabitants of the small island state gather around the Fagradalsfjall volcano, marvel at the gruesome and beautiful spectacle at the “public viewing”.

But you shouldn’t get too close to Hellfire, warn civil defense officials who have gathered at the “viewpoints” to raise awareness.

Because many underestimate the dangers: Visitors took selfies just a few meters from the seething lava – too dangerous, a spark could set clothes on fire, for example.

One of the civil defense officials told the AP news agency that a visitor even tried to cook bacon and eggs on the lava – but the pan had melted in the heat.
Although volcanoes are part of everyday life in Iceland, it is extremely rare that lava flows out of the earth so close to the capital. The lava area is only 20 kilometers away from Reykjavik – for the more than one hundred thousand inhabitants, it is practically around the corner.

Leipzig wants to force a turnaround against ailing “Reds” 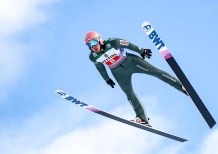 Steep rise in infection – Merkel is terrified of THIS curve!...