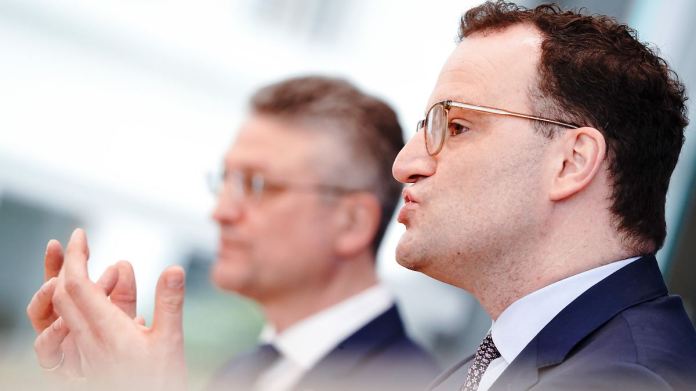 After the tipped “Easter rest”, the federal and state governments have little to counter the increasing numbers of infections. Health Minister Spahn at least rejects further easing efforts. After Easter, the lockdown must continue, he explains in a public consultation hour.
A few days before Easter, Federal Health Minister Jens Spahn agrees people in Germany to continue the corona lockdown beyond the holidays. “If we take the numbers, we need another 10 or 14 days to shut down our contacts and mobility properly,” said the minister at an online discussion in which he, together with RKI boss Lothar Wieler and the president of the Paul Ehrlich Institute (PEI), Klaus Cichutek, answered citizens’ questions.

This is a lockdown, “as we saw it at Easter last year,” said the CDU politician. Family in a large circle “just won’t work this year”. He appealed to the citizens “in case of doubt, to implement more than the state rules”. If the third wave of infections can be broken, opening steps accompanied by tests are possible. “There are already models that show that it works,” said Spahn, referring to the example of Tübingen, where there are opening steps flanked by tests.

The prerequisite is “that we get the infection process under control,” added Spahn. “Intensive care medicine is also full of Covid 19 patients again”. The Robert Koch Institute (RKI) reported 20,472 new infections on Saturday, 4,000 more than a week ago. The seven-day incidence rose to 124.9. The scientific director of the Divi intensive care register, Christian Karagiannidis, has therefore called for a 14-day hard lockdown in the whole of Germany in the “Rheinische Post” in order to prevent a historic peak load on the intensive care units.

The SPD health expert Karl Lauterbach is also pushing for stricter measures in view of the sharp rise in the number of new infections. “We have to renegotiate again quickly,” said Lauterbach to the “Tagesspiegel”, without a sharp lockdown it won’t work. As a supplement to the previous measures, he proposes nationwide exit restrictions: “Exit restrictions from 8 p.m. for two weeks would take effect – we’ve seen it in France, Great Britain and Portugal.”

Spahn was confident about the progress of the vaccination campaign. For April 15 million vaccine doses are expected, in the entire first quarter there were a total of 19 million. According to him, the vaccinations should first be started in the general practitioners’ practices after the holidays, initially with the vaccine from Biontech. Later the Astrazeneca vaccine will also be administered there. Finally, the company doctors could also be involved.

The Minister of Health defended the adherence to vaccination prioritization. It would not be right to start vaccinating the younger ones as long as this has not yet ended with the older ones, stressed Spahn. “It saves lives, it is not a bureaucracy.”

Spahn expects the first deliveries of the newly approved vaccine from Johnson & Johnson from mid-April. In the week from April 12, delivery of 275,000 cans can be expected, the minister said. He pointed out that, unlike the other vaccines, this preparation only had to be administered once.

According to PEI boss Cichutek, three other vaccines are currently being tested by the European Medicines Agency (EMA) – namely the vaccines from Curevac, Novavax and the Russian preparation Sputnik V.

Corona did not break out in Wuhan after all? Researchers...

Big tears! That’s why Denise doesn’t see a future with...

dm: “Are you serious?” The price for the kitchen product shocks...

Rose remains Gladbach coach until the end of the season