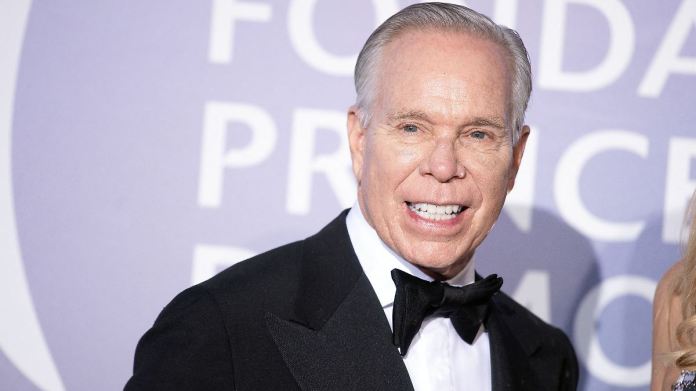 Tommy Hilfiger fails with his first own shop. But shortly afterwards he worked his way up from a “dump in the middle of the USA” to one of the most famous designers in the world and proved that the American dream can come true. Now the multimillionaire is celebrating his 70th birthday.
There are few people who fulfill the idea of ​​the American dream as much as designer Tommy Hilfiger. The American, who celebrates his 70th birthday this Wednesday, managed to work his way up from a poor background to become a multimillionaire. At the same time, for well over 30 years, he has mastered staying relevant and up-to-date with his fashion brand, thus repeatedly proving his extraordinary business acumen.

Thomas Jacob Hilfiger was born in Elmira, New York State, in 1951. He later described his place of birth as “a dump in the middle of the USA”. He grew up in a simple family as the second oldest of a total of nine children of a watchmaker and a nurse. His parents’ greatest wish was for him to become an engineer after high school. The designer later described his father as very strict in his biography. Once a week he hit him with a belt.

When he was 18, Hilfiger decided against another school career and instead turned to fashion. It quickly became apparent that he had a knack for design: he traveled to New York City several times, bought jeans and bell-bottoms there, only to redesign them later and sell them on in his hometown of Elmira. In 1971 he opened his first shop with just $ 150 in start-up capital and with two friends. Although “People’s Place” quickly developed into a hotspot for young, fashion-conscious people, disappointment followed after seven years: the store went bankrupt. At the time, Tommy Hilfiger was 25.

But the American was not ready to give up. He moved to New York with the aim of becoming a designer. Despite bankruptcy, he turned down lucrative offers as a design assistant to Calvin Klein or Perry Ellis. Because he was firmly convinced that he would create his own brand with his name. Which he ultimately managed to do in 1985 with the help of his good friend, fashion designer Mohan Murjani. Hilfiger founded the “Tommy Hilfiger Corporation” and from then on sold clothing under his name.

Understanding of fashion and pop culture

After the New Yorker had demonstrated his talent for design and perseverance, he also showed his knack for marketing. His classic, neat, and no-frills fashion was accessible to everyone, which is why it quickly caught on with both chic youngsters and hip-hop artists. At the latest when rapper Snoop Dogg wore a shirt with the imprint “Tommy” on the US show “Saturday Night Live” in 1994, the brand with the stand-up collar became a must-have for the youth of that time. In addition, Tommy Hilfiger sponsored musicians like Britney Spears and Lenny Kravitz on their tours in the 90s, which catapulted the brand’s awareness even higher. The designer quickly understood: fashion and pop culture go hand in hand.

This is also proven by the revival of Tommy Hilfiger’s brand in recent years. After it lost its relevance around the turn of the millennium, it has been a real box-office hit again for some time. Hilfiger seems to be experiencing a revival. The reason for this is called, among other things, Gigi Hadid.

Once again, the father of five, who is a second marriage to ex-model Dee Ocleppo, hit the pulse of the times with Gigi Hadid. In 2016 he brought beauty on board and created the “TommyXGigi” collection with her. There had never been such a collaboration with a model before. With Gigi Hadid, he also secured a platform with around 25 million Instagram followers that the model had at the time. Collaborations with it girl Hailey Bieber, top model Winnie Harlow, racing driver Lewis Hamilton and actress Zendaya followed later.

Young people want to wear Tommy Hilfiger again – just like their role models. So the designer’s brand hasn’t aged a bit with him on his 70th birthday. Having made the US college look popular again worldwide is what Hilfiger sees as his life’s work. An end does not seem to be in sight for a long time.

Leitinger on training with Hirscher: “Not so reserved” – winter sports...

Since the lockdown, significantly fewer passengers in Berlin’s buses and trains...

“Will always be friends”: Lindsey Vonn breaks up her engagement

Politician in Namibia is called Adolf Hitler: “Do not strive for...

Jets in Frankfurt in an artificial coma – Kreis-Anzeiger