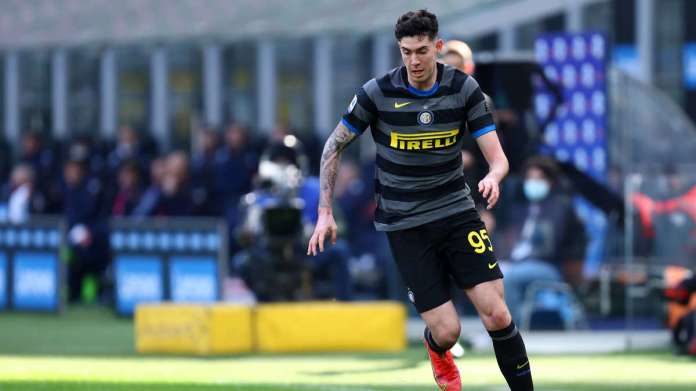 David Alaba is leaving FC Bayern in the summer, and Jerome Boateng is on the way to saying goodbye. A top Italian talent is under discussion as a replacement.

Munich – David Alaba has been playing for FC Bayern since 2008, and Jerome Boateng followed him three years later to the Isar. The two defenders formed the defensive axis at Munich for a decade, and they celebrated countless championships and DFB Cup victories together. In 2013 and 2020, the Champions League trophy soared into the sky. From next season, the two will no longer be on the pitch together for Bayern. While Alaba confirmed his departure from the record champions, Boateng’s future at Bayern is still uncertain. His contract expires this summer. One thing is certain, however: Munich is looking for reinforcement on the defensive. Alessandro Bastoni from Inter Milan is said to have caught the attention of FC Bayern.

FC Bayern Munich: is Alessandro Bastoni coming in the summer?

Like the portal FcInterNews.it reported, Bayern sports director Hasan Salihamidžić is said to have contacted the adviser to the 21-year-old central defender. Bastoni has made his way into the Milanese starting XI this season, he is considered one of the greatest talents in Italian football. It is uncertain whether the defensive cock will want to leave his club. Inter leads the Italian league, he calls his coach Antonio Conte the “[Lionel] Messi the coaches, ”reported Bleacher Report.

Probably the most weighty argument against a transfer to FC Bayern is the proud market value of 50 million euros, the transfermarkt.de leading. Bayern management would have to dig deep into their pockets to unleash Milan’s jewel in defense. It is doubtful that Munich will sign a second central defender of this size. In mid-February, Bayern made the commitment of the defender Dayot Upamecano public. For the 22-year-old Frenchman, the people of Munich transfer 42.5 million to Leipzig.

FC Bayern Munich is struggling with defensive weaknesses this season

In the current season, FC Bayern can look forward to two big titles. In the Bundesliga, the Munich leaders are leaders, and in the Champions League, the duels against Paris St. Germain are still pending. The fact that Bayern are among the favorites for the highest European title this season is mainly due to the offensive around Robert Lewandowski. With his goals, the center forward hides the defensive weakness of Bayern, which, especially in the Bundesliga, leads to unexpected successes for the opponents. Bayern conceded 35 goals in 26 games. Second-placed Leipzig only conceded 21. So it’s no wonder that the Munich team are looking to strengthen their defensive line. Inter player Alessandro Bastoni could replace David Alaba as left-footed player.

But Munich is not the only European heavyweight vying for the services of the Italian national player Bastoni. Like the English one Sun writes, Liverpool FC should also be interested in the Inter player. Alessandro Bastoni is said to support the ailing English champions on the defensive. As the sheet reports, the Reds would be willing to raise 50 million euros for the transfer. But Inter-Coach Antonio Conte is said to have voted against the sale of the top talent. Inter Milan did not respond to the offers from Manchester City and FC Barcelona, ​​writes the Sun. Alessandro Bastoni’s transfer to the Isar would be a big surprise. (jjf)

“Be careful what you wish for”

Dispute over restaurant terraces – Federal Council could even send military...