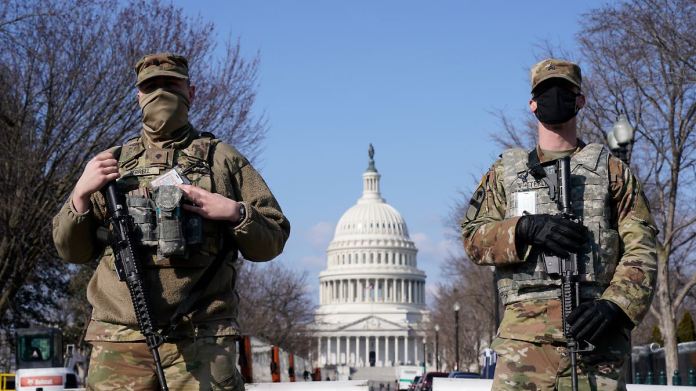 After Trump supporters storm the US Capitol, the National Guard moves in to secure the parliament building. Since secret services are warning of further attacks, the soldiers should now stay in Washington longer than planned. Her job originally ends next week.
According to media reports, the police responsible for the US Capitol have requested longer support from the National Guard to secure the parliament building. In the event of a commitment, the soldiers would be on duty at the Capitol until May – two months longer than planned – reported the Washington Post and the news channel CNN on Thursday, citing officials in the Ministry of Defense.

The original plan calls for the deployment of several thousand reservists to end next week. When asked, the Pentagon referred to the Capitol Police, from whom no confirmation of the reports could be received at first.

Supporters of the elected US President Donald Trump, who has since left office, stormed the Capitol on January 6 during a session of Congress and wreaked havoc and havoc there. The Capitol Police subsequently came under fire because parliamentary security forces were not prepared for the attack and could not stop the intruders. At least five people were killed in the riots, including a police officer. The then head of the Capitol Police, Steven Sund, resigned.

The National Guard had moved in to reinforce the local security forces after the attack on the Capitol. There was a warning for this Thursday: The Capitol Police announced on Wednesday that intelligence information pointed to a possible plan by a militia to attack the Capitol. The situation initially remained calm during the day.

Warnings of new violence on March 4th have been around for weeks. Supporters of the far-right conspiracy movement QAnon believe that Trump will come back to power on that day and be sworn in for a second term. By 1933, the US presidents took their oath of office on March 4th.

It is difficult for the security authorities to assess how seriously threats of violence from extremists on online platforms and in chat groups are to be taken. In view of the failure of the authorities in the attack on January 6, however, there is great concern that assessments will be wrong again.

Information about the appearance of Snoop Dogg – The Young Bucks...

Will a simple flu remedy bring a “breakthrough”?