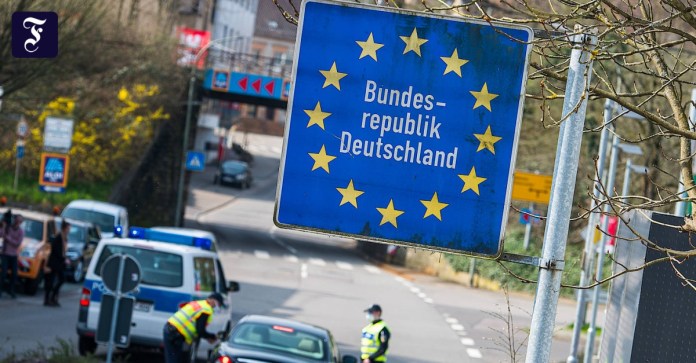 WIn spite of the sharp rise in the number of corona infections, the federal government will classify France as a high-incidence area with mandatory testing upon entry from Sunday. The Austrian state of Tyrol as well as the Czech Republic and Slovakia will be deleted from the list of virus variant areas at the same time, as the Robert Koch Institute announced on Friday. This removes a significant part of the entry restrictions for these countries and regions.

The infection situation in France had deteriorated continuously in the past few weeks. The authorities report around 30,000 new infections every day. The situation in the hospitals is extremely tense in several regions. The number of new infections per 100,000 inhabitants in one week is currently more than 300. The classification as a high-incidence area occurs from an incidence value of 200.

Anyone entering from these areas must be able to show a negative corona test upon entry. The respective federal states usually have special regulations for commuters. The Moselle border region had already been classified as a virus variant area at the beginning of March. There is already an obligation to test when entering the country. It will probably only be checked at random in the future as part of the so-called veil manhunt behind the border. Stationary border controls are not planned.

At the border to Tyrol and the Czech Republic, on the other hand, there are currently such border controls at the request of the neighboring states of Bavaria and Saxony. It is considered likely that they will now be lifted at least on the border with Tyrol, which will only be a “normal” risk area from Sunday. The Czech Republic and Slovakia, on the other hand, remain high incidence areas.

The classification as areas in which particularly contagious and dangerous virus variants are widespread was made on February 14th. From there, only Germans and foreigners with a residence and residence permit in Germany are currently allowed to enter. There are exceptions, for example, for truck drivers and cross-border commuters with systemically relevant professions. You must present a negative corona test upon entry. All other people entering the country have to be in quarantine for 14 days – without the possibility of shortening them.

Marco Reus and his form weakness at BVB: standing up men...

All questions and answers about vaccination against Corona in Berlin –...

Bares for Rares: This has never happened before! The candidate...

Man (29) shoots in the air and kicks policeman against the...

There are still a lot of 500 euro bills in circulation...

Curfew in several districts – and in Hattersheim | hessenschau.de