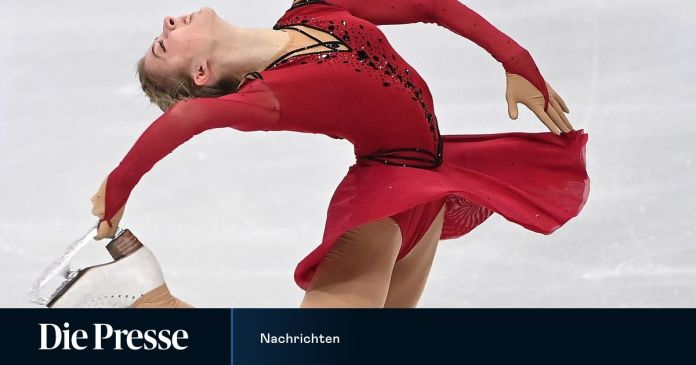 Olga Mikutina stormed to eighth place with a flawless freestyle and, like Miriam Ziegler / Severin Kiefer, won the Olympic ticket.

Olga Mikutina made an outstanding World Cup debut. The 17-year-old from Vorarlberg ran a flawless freestyle as eleventh of the short program and with the new personal best of 198.77 points in eighth place – and with the Olympic quota. Mikutina, who moved from the Ukrainian metropolis of Kharkiv to Feldkirch five years ago, was only 18.43 points behind bronze, her best point mark so far from the 2019 Junior World Championships rose by 53.43 points.

Gold went to Anna Shcherbakowa (233.17), who led a Russian triple victory in front of Elisaveta Tuktamysheva (220.46) and Alexandra Trusowa (217.20). Thanks to her fourfold jumps, the latter managed to catch up from twelfth place to the podium.

The last Austrian to make it into the top ten at a World Cup was Julia Lautowa in 1997 (also eighth). “I can hardly believe it and I am overjoyed about this success. After finishing eleventh in the short program on Wednesday, I was of course motivated to give everything again today. But I would never have dreamed that the freestyle would be such a precision landing and that I could catch up a few places, ”says Olga Mikutina, who moved from the Ukrainian industrial city of Kharkiv to Feldkirch in Vorarlberg five years ago.

Ziegler / Kiefer will also be there in Beijing

Austria’s pair skaters Miriam Ziegler / Severin Kiefer made it to the Olympics in eleventh place in the World Cup. “This early Beijing ticket motivates us. We are already looking forward to our third games together,” said Ziegler. In the freestyle on Thursday, the Austrian couple lost two positions after finishing ninth in the short program. With 182.30 points, around two points were missing from the desired top ten place.

Tenth place in 2019 remained her best World Cup result. “We are very satisfied with our freestyle performance today. Unfortunately we did not receive some points from the judges that we were counting on. That is why we will analyze our performance today in detail with experts,” said Kiefer.

Gold in Stockholm went to the Russians Anastasia Mishina / Aleksander Galliamow for the first time, with 227.59 ahead of the Chinese defending champions Sui Wenjing / Han Cong (225.71). Your compatriots Aleksandra Bojkowa / Dmitrij Koslowskij (217.63), who were still leading after the first part, won bronze.

In the men’s competition, the Japanese Yuzuru Hanyu is heading for his third world title after 2014 and 2017. After the short program, the Olympic champion took the clear lead with 106.98 points ahead of his compatriot Yuma Kagiyama (100.96). Defending champion Nathan Chen (98.85) from the USA was third in the intermediate ranking. Austria’s contribution Maurizio Zandron landed with 63.88 points only in 29th place, which clearly missed the free skate of the best 24.

Mission in the Stuttgart region: Leftists bump into Bible verses in...

Refugee took to court because of homosexual postings against Facebook –...