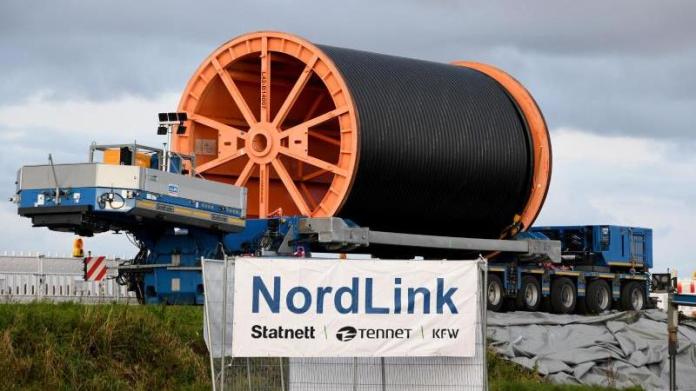 Wilster / Tonstad (dpa) – The trial operation of the Nordlink power line between Germany and Norway is nearing the end. “We did not find any major problems,” said the managing director of the German network operator Tennet, Tim Meyerjürgens, on Monday. “We just had to adjust a few settings.”

The 623 kilometer long electricity highway has been connecting the electricity markets of Norway and Germany for three months. According to Tennet, customers in Norway and Germany will benefit from the new line during regular operations. If electricity prices are high in Germany because local wind turbines and solar cells only produce little electricity, energy from Norwegian hydropower can be imported via Nordlink. This is particularly true at times when the flow into the water reservoirs is high. In dry seasons, Norway can import electricity from German wind and solar energy surpluses.

The route runs over 516 kilometers as a submarine cable through the Wadden Sea and at the bottom of the North Sea. It is considered to be one of the longest connections of its kind worldwide. On the German side, the submarine cable reaches the mainland on the dike north of Büsum. From there it continues as a 54-kilometer underground cable across the Dithmarschen district and under the Kiel Canal to Nortorf near Wilster in the Steinburg district. One of the two so-called converter stations is located there. The other converter station is in Tonstad, Norway. It is connected to the submarine cable via a 53-kilometer high-voltage overhead line. At the converter stations, the electricity is converted from direct to alternating current or from alternating to direct current – depending on the market situation.

“In the trial run, we put the system through its paces and transferred electricity to the limits of its performance in both directions,” said Meyerjürgens. According to the information, the cable with a capacity of 1400 megawatts can supply around 3.6 million households with climate-neutral energy. That corresponds to a large part of the private households in Hamburg and Schleswig-Holstein. The official commissioning of the nearly two billion euro Nordlink line is planned for May 27th.

Solid State Drive: Samsung SSD 980 without “Pro” and without DRAM

“MaiLab”: How safe is the Astrazeneca corona vaccine? Mai Thi...

Weekly review: Waiter, there’s a cell phone on my pizza …

Berlin: assassination attempt after poker round! Nephew of the clan...