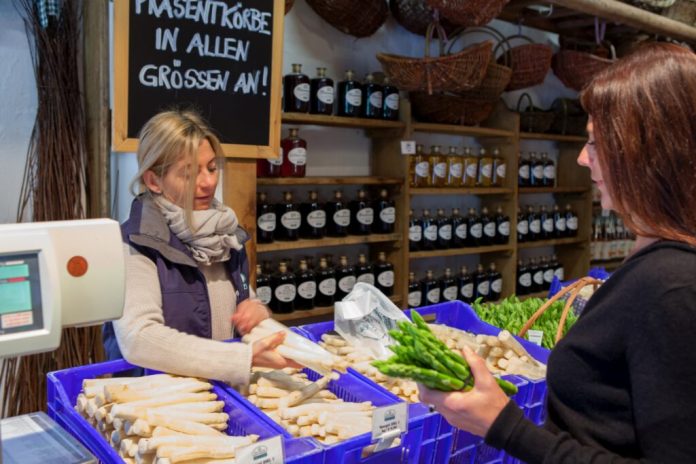 (GMH) Finally there is fresh asparagus again! Thanks to short distances and controlled cultivation, we can buy what grows on our doorstep with a clear conscience. The regional asparagus harvest on a larger scale begins as early as the end of March / beginning of April, thanks to modern cultivation methods, depending on the geographical location and federal state. At Easter, at the beginning of April, the German asparagus should then be available in farm shops everywhere – regardless of whether the weather cooperates or not.

On the table as early as possible

The German asparagus harvest used to start in the second half of April due to the weather. Then the imported asparagus from Greece, Peru and Chile came into the supermarkets and aroused the desire to have the noble seasonal vegetables on the table as early as possible in the year. The asparagus growers in this country knew what to do: nowadays they control plant growth with films. “In my opinion, there is no alternative to film cultivation,” says Ralf Große Dankbar, who advises businesses on asparagus cultivation for the North Rhine-Westphalia Chamber of Agriculture. The two-tone plastic cover allows you to accelerate or slow down the harvest as required.

Asparagus plants overwinter around 40 centimeters below the ground and start sprouting as soon as the soil temperature rises to ten degrees Celsius. The warmer it is, the stronger the natural impulse of the asparagus plant (botanical name Asparagus Officinalis) to grow and push the shoot upwards. While the colorless shoot grows relatively slowly at around one centimeter a day, it can be up to five centimeters a day at warmer temperatures. If the asparagus grower puts the black foil side up, the sun warms up the earth dam more, which allows the sprouts to sprout earlier. With the white side up, the rays are reflected and an undesired rise in temperature in the earth is delayed. This slows growth in warm weather.

In relation to the amount harvested, only a small amount of film is required for growing asparagus. The material can be reused for many years and then recycled, explains the asparagus expert. In addition, the film cultivation replaces the imported asparagus with long transport routes. Incidentally, imported asparagus in Greece and Peru grows 100 percent under foil. Another advantage are white asparagus heads: If a sprout grows out of the asparagus ridge, it is protected from sunlight by the cover and does not turn purple. The head also stays closed instead of blooming.

The influence applies to both early and late asparagus varieties. According to the asparagus expert Große Dankbar, they do not differ in taste, but in harvest time. Asparagus growers usually rely on several varieties in order to be able to offer the fresh noble vegetables over the entire asparagus season from the beginning of April to St. John’s Day on June 24th. Because the shoots can only be harvested for about six weeks, then the asparagus plant has to sprout to regain its strength. “The soil has a greater influence on the taste of the asparagus than the variety,” says Große Dankbar. In addition to the proportion of clay, sand and humus, the soil temperature also influences differences in taste. According to the asparagus experts, however, all German growing regions and all types of fine vegetables have one thing in common: “They taste great! I can unreservedly recommend German asparagus! ”

Asparagus – the fresher the better

Asparagus should be served as fresh as possible, says Ralf Große thankfully. The asparagus expert from the North Rhine-Westphalia Chamber of Agriculture therefore recommends fine vegetables from the region. Because the white sticks age quickly after being pricked and develop bitter substances if stored for too long. “The freshest is the asparagus directly from the asparagus farmer – pricking, sorting, cooling and selling in the farm shop happens here on the same day.” In the supermarket, care should be taken to ensure that the sticks are chilled and have juicy cut surfaces. Correct storage ensures that the asparagus stays fresh longer. “At home in a damp cloth in the refrigerator, it lasts three to four days,” says the asparagus expert.

“Who Wants to Be a Millionaire?” – Viewers reproach the...

Frankfurt am Main: Broken vehicle on A 5 between Westkreuz Frankfurt...

New trailer for Disgaea 6: Defiance of Destiny introduces the main...

Corona virus in Berlin: vaccination start in the arena in Treptow...