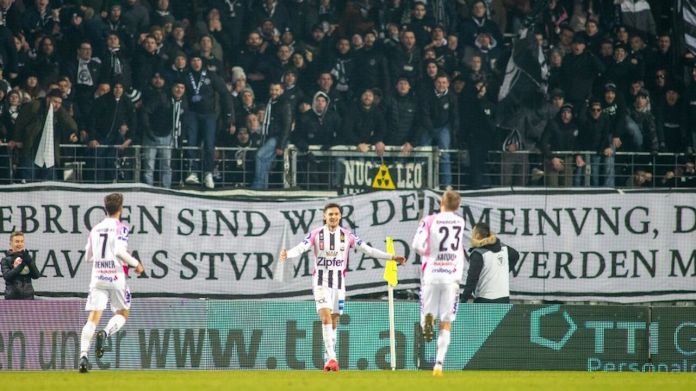 The Upper Austrians keep against RZ Pellets WAC away with 0: 1 after extra time the upper hand. Scored the gold goal Philipp Wiesinger per Elfmeter.

The defending champion ensures a quicker decision against the SK Puntigamer Sturm Graz. After a balanced initial phase, Salzburg left the Grazers no chance and won 4-0. Enock Mwepu (2), Mergim Berisha and Brenden Aaronson are successful in reaching the final again.

The semi-finals in detail

Internal differences cause concern for the Carinthians before the game. As a result, the three regular players must Michael Liendl, Christopher Wernitznig and Michael Novak take a seat in the stands. A measure that leaves gaps, especially in the Lavanttaler offensive game.

LASK dominated the game from the start and had 70 percent possession at times. But the people of Linz also find it difficult to create opportunities. After the first goal closings by Pure Runner (10.) and Gernot Trauner (11.), Renner creates danger again. However, on the wrong side of the field. The LASK defender heads a flank of the WAC very close to his own goal (13th).

After that, calm returns, both teams can hardly set offensive accents. Only after 40 minutes does it get precarious again, and how: LASK captain Gernot Trauner comes after a corner from Peter Michorl five meters in front of the WAC keeper Alexander Kofler completely unrestricted at the end. To everyone’s surprise, Trauner thunders the ball over the goal.

After the change of sides, the game subsides more and more. Except a half-chance of Dejan Joveljic, the Alexander Schlager in the goal of Linz does not cause any problems, there are no noteworthy goal scenes.

The decision is ultimately made in the extension. WAC player Jonathan Scherzer comes too late against Reinhold Ranftl – ​​penalty, clear decision. Philipp Wiesinger did not miss this chance and slammed the ball into the left corner (97th).

The Carinthians then try to do a little more for the offensive, but it should not be the evening of the WAC. Thomas goiginger and Co. confidently defend their narrow lead and are happy about their first entry into the cup final since 1999.

The top game, which has to be relocated from the Merkur Arena in Graz to the Wörthersee Stadium in Klagenfurt due to the poor quality of the turf, begins as the direct duel in the Bundesliga ended – namely with a strong storm team that completely challenges the defending champion.

The Bulls only become more dominant after around twenty minutes, but there are no real chances to score on either side. The first highlight immediately ensures activity on the video wall. Ex-national team player Zlatko Junuzovic circles a corner ideally on the head of Enock Mwepu, who hits a 1-0 lead with his head (36th).

The duo Junuzovic-Mwepu also provides the first highlight in half-time two. This time the veteran is active as a free-kick taker and once again serves Mwepu, who heads in to make it 2-0 (54th). Storm goalie Jörg Siebenhandl has no chance with the superbly placed header.

On the other side can be Cican Stankovic award in the gate of Salzburg. Gregory Wüthrich Forces Stankovic to a brilliant parade after a Jantscher flank – strong action by all involved (56th).

Succeeds in minute 72 Mergim Berisha the gate of the evening. The German fired a dream shot over Siebenhandl from the far right. Sensational hit!

After that, there is no more country in sight for Graz, the defending champion is too dominant. Brenden Aaronson dusted off after a serious mistake on the Graz defense to 4-0 (79th).

After 93 minutes, one thing is certain: The Bulls are in the final of the UNIQA ÖFB Cup for the eighth time in a row.

Data and facts about the game: https://www.oefb.at/cup/Spiel/2884726/?SK-Puntigamer-Sturm-Graz-vs-FC-Red-Bull-Salzburg

The cup winners of the last 10 years

Bachelor candidate Kim-Denise runs away with the bus driver

Hamilton replacement George Russell burns the next best time in the...

Pitfalls of everyday Corona: is it petty to cancel the Advent...

Corona pandemic: Covid-19 vaccination in Nidwalden is going according to plan