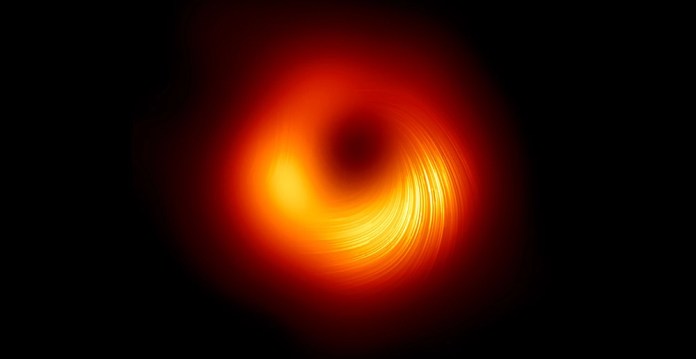 Twisted light: The raging matter at the event horizon of the black hole M87 * is strongly magnetized – this is revealed by new images from the Event Horizon Telescope (EHT). Because they show for the first time that the light in the bright ring around the black hole is polarized. This points to the influence of magnetic fields and provides valuable insights into how such gravitational giants can create enormous jets from radiation and high-energy particles.

In April 2019, the first photo of a black hole caused a worldwide sensation. It was recorded by the Event Horizon Telescope (EHT), a global network of eight telescopes. It provided unique views of the bright, ring-shaped accretion disk around the dark shadow of the supermassive black hole in the galaxy M87. Further recordings revealed that the bright ring around the black hole wobbles slightly and that it hides a phenomenon predicted by Einstein – a photon ring.

How does the light oscillate on the black hole?

Now the Event Horizon Telescope provides further insights into what is happening at the black hole. To do this, the astronomers of the EHT collaboration once again aimed their eight coupled telescopes at the heart of the galaxy M87, which is 55 million light years away. The aim this time was to measure the polarization of the light in the bright plasma ring. A change in the direction of light oscillation can reveal the external influences that the matter circling around the event horizon is exposed to – for example in the form of magnetic fields.

“This work is an important milestone: The polarization of light contains information that allows us to better understand the physics behind the image we saw in April 2019. That wasn’t possible before, ”explains Ivan Marti-Vidal from the University of Valencia in Spain. “The creation of this new polarization image required years of work because the acquisition and analysis of the data was connected with complex techniques.”

The light ring is polarized

The new recordings are now available. They reveal that a significant proportion of the light around the M87 black hole is linearly polarized. This polarization is most evident in a region in the southwestern part of the ring of light, as the astronomers report. It runs almost azimuthally there – in the direction of the ring. It is the first time that astronomers have been able to measure the polarization, and thus a signature, of magnetic fields so close to the edge of a black hole.

“The newly published polarized images are key to understanding how the magnetic field enables the black hole to engulf matter,” says EHT member Andrew Chael of the Princeton Center for Theoretical Science. Because the orientation and strength of the polarization reflects the characteristics of the magnetic field lines and these in turn provide information about the interplay between incoming and ejected matter at the black hole.

As the astronomers determined with the help of additional modeling, the gas at the event horizon of the black hole must be strongly magnetized in order to explain the observed polarization pattern. “The observations suggest that the magnetic fields at the edge of the black hole are strong enough to push back the hot gas and help it withstand gravity. Only the gas that slips through the magnetic field can spiral inward to the event horizon, ”explains Jason Dexter of the University of Colorado at Boulder.

The strong magnetic fields could also explain another phenomenon in the black hole: like many other active galaxy centers, M87 also generates two high-energy currents of radiation and accelerated particles that rush out into space for thousands of light years perpendicular to the plane of the galaxy. So far, however, it is unclear how the energy for these jets is generated and which mechanisms accelerate the particles.

“We are now seeing the next crucial piece of the puzzle for understanding how magnetic fields behave around black holes and how activity in these very compact regions of space can drive powerful jets that extend far beyond the galaxy,” says Monika Mościbrodzka from from Radboud University in the Netherlands. The new observations suggest that the interaction of the hot plasma with strong magnetic fields is the driving force behind these jets.

However, research into the magnetic fields around M87 has only just begun and the Event Horizon Telescope will continue to keep this galaxy core in its sights. “The EHT is making rapid advances, the network is being technologically upgraded and new observatories are being added,” says EHT collaborator Jongho Park. “We expect that future EHT observations will more accurately map the magnetic field structure around the black hole and tell us more about the physics of the hot gas in this region.” (The Astrophysical Journal, 2021; doi: 10.3847 / 2041-8213 / abe71e; doi: 10.3847 / 2041-8213 / abe4de)

Bastian Schweinsteiger: Sensation in the Bundesliga? He would follow in...

Fund managers expect a turnaround after a turbulent 2020 | ...

The perfect complement to the MSCI World

No application from Tesla for battery factory – Berlin.de

Frankfurt am Main: Danger from object on A 66 between Frankfurt...