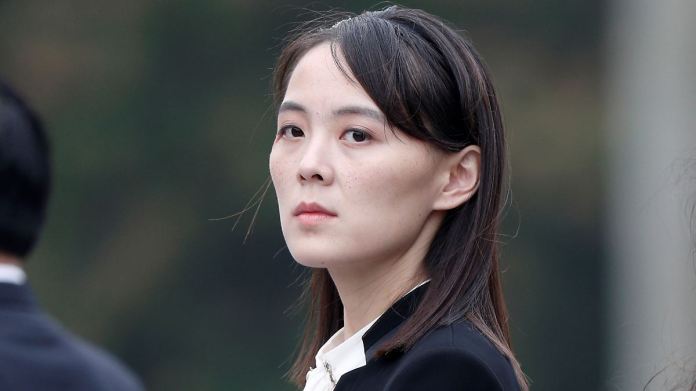 For weeks the Biden government tried in vain to establish contact with North Korea. Well, just before US Secretary of State Blinken’s flying visit to South Korea, there is an answer. Kim Jong Un’s sister warns Seoul and Washington against further “provocations” in sharp words.
The influential sister of North Korean ruler Kim Jong Un has attacked the United States with sharp words. The government of the new US President Joe Biden wants to “spread the smell of gunpowder over our country,” said Kim Yo Jong, according to the North Korean state newspaper “Rodong Sinmun”. “If you want to sleep soundly for the next four years, it would be better not to get involved in work that will rob you of sleep.”

It was North Korea’s first public statement about Biden. At the same time, Kim Yo Jong condemned the US military maneuver with South Korea that was launched last week. She accused the government in Seoul of playing the “March of War”. Should South Korea act “even more provocatively”, Kim Yo Jong threatened to terminate a military agreement between the two states from 2018.

Former US President Donald Trump had tried in recent years to work towards dismantling the North Korean nuclear program through direct encounters with ruler Kim Jong Un. The last summit between Trump and Kim in Hanoi in February 2019 failed, however, and the nuclear negotiations between the two countries have been on hold since then. Tensions between North and South Korea also intensified again.

US Secretary of State Antony Blinken and Pentagon boss Lloyd Austin began their first trip abroad to Japan and South Korea on Monday. In a joint comment in the Washington Post, both ministers reiterated their intention to “revive our relationships with friends and partners.” Blinken and Austin are expected in Seoul on Wednesday.

Coronavirus: does your height increase the risk of infection? Study...

Donald Trump: Ex-supporter Bolton dares to predict – “Donald will be... WhatsApp forces users to offer a new service – those who...