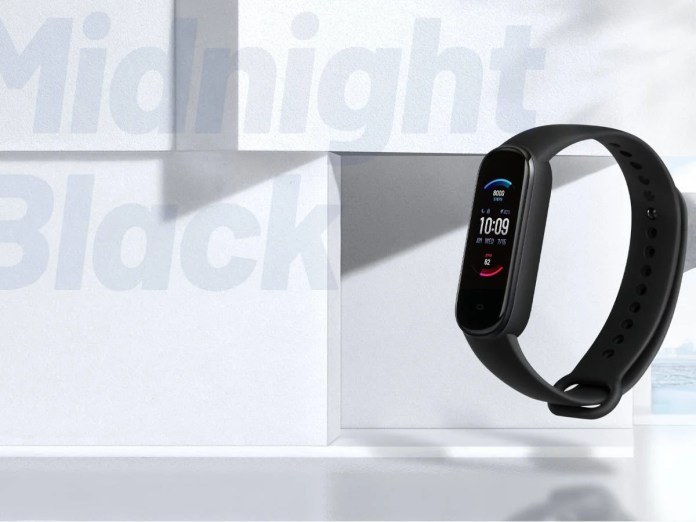 Hopefully, Aldi Süd will soon herald spring-like temperatures with two new wearables offers. From March 29th, you can buy a fitness bracelet and a smartwatch at a special price in addition to the Nokia 3.4 in the southern branches of the food discounter. In addition to the Amazfit Band 5, the Amazfit T-Rex is also available for purchase. We’ll tell you what you should consider before making a purchase.

If you are primarily looking for an inexpensive everyday companion for your wrist, then you can look forward to the Amazfit Band 5 at Aldi Süd. Because the small fitness tracker is essentially limited to important basic functions with eleven pre-installed sport modes, but offers a battery life of up to 15 days. And the bracelet is waterproof (5 ATM). You can navigate through the menu on a 1.1 inch (2.79 centimeter) AMOLED display – with a resolution of 126 x 294 pixels.

In contrast to the almost identical Mi Band 5 from Xiaomi, the Amazfit Band 5 is also able to measure blood oxygen saturation. However, there is also no independent GPS receiver. So you always have to carry your paired smartphone (at least Android 5.0 or iOS 10.0) with you in order to be able to log your workouts with all the details. An NFC module for mobile payment is also not installed.

What does the Amazfit Band 5 cost?

The price at which you will be able to buy the Amazfit Band 5 from Aldi from March 29 is not yet known. Aldi Süd is unlikely to reveal this secret until this week or next. It is likely that the retail price will be somewhere between 19 and 25 euros. Because you can currently buy the 24-gram fitness bracelet on the Internet at prices starting at just under 25 euros. Amazfit itself is currently selling the bracelet at a price of just under 30 euros.

Would you prefer a smartwatch instead of a fitness bracelet? Then you should take a closer look at the offer for the Amazfit T-Rex. But only if you appreciate a striking design in your digital wristwatch. Because the Amazfit T-Rex is without a doubt a comparatively massive representative of its kind.

At first glance, the T-Rex Smartwatch is reminiscent of Casio’s G-Shock models. However, the T-Rex offers a 1.3 inch (3.3 centimeter) AMOLED touchscreen (360 x 360 pixels) and can also be used under extreme conditions according to the military standard MIL-STD-810. It is not only heat-resistant up to a temperature of 70 degrees, but also defies extremely cold conditions of up to -40 degrees for up to 1.5 hours. In addition, it is waterproof up to 50 meters and is therefore also suitable for logging your swimming training.

Unlike the Amazfit Band 5, the Amazfit T-Rex Smartwatch is also equipped with its own GPS receiver. It can also record distances traveled independently of a paired smartphone. The manufacturer itself promises a running time of up to 20 days, 14 pre-installed sport modes as well as calls and messages received directly on the wrist.

What does the Amazfit T-Rex cost?

The price for the Amazfit T-Rex at Aldi is currently still a secret. At the beginning of the year it was already available at Aldi Nord for just under 90 euros. And it is quite likely that this price will be valid again from March 29th – maybe a little less. Because you can currently buy the smartwatch in other web shops at prices starting at just under 99 euros.

Royal Albert Hall: anniversary celebrations only after the corona crisis “It’s all a fake”: Katy Perry presents her real hair