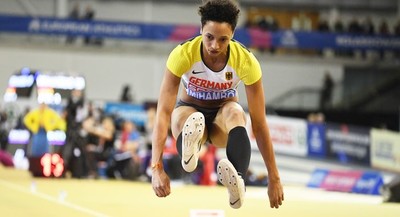 Interesting facts from the world of athletics

As world champion, Malaika Mihambo (LG Kurpfalz) is the big favorite in the women’s long jump at the European Indoor Championships in Torun (Poland; March 4th to 7th). The defending champion Ivana Spanovic (Serbia) canceled her participation due to an injury, but the 27-year-old will still face strong competition. The Italian Iapichino (6.91 m) and the Swede Sagnia (6.82 m) are currently in the world’s best of the year ahead of Mihambo (6.77 m). A challenge that the world champion accepts aggressively: “I will definitely be challenged, which will motivate me even more to do my best,” she told the SWR.

At the European Indoor Championships in Poland, the World Cup third in the decathlon Kai Kazmirek (LG Rhein-Wied) would like to finish the indoor season in the heptathlon successfully. The 30-year-old now spoke to the SWR about his objective: “I want to score over 6,100 points, I would be happy with that. The tests went well, now I just have to pack it into an all-around competition. “

Constantin Preis and Mohamed Mohumed have to do without Torun

The German team will have two fewer athletes at the European Indoor Championships in Torun (Poland; March 4th to 7th): Shortly before the title fights, the German 3,000 meter champion Mohamed Mohumed (LG Olympia Dortmund) against a start – it had turned out in the regeneration phase after the indoor championship that he did not yet have the substance for up to two more 3,000 meter races after the training failure in the preparation for the season. Constantin Preis (VfL Sindelfingen) has to do without his 400 meter premiere at an indoor European championship: The German champion over 400 meter hurdles was slightly injured in the final training and does not want to risk anything with regard to the summer season. sb

The European Indoor Championships begin on Thursday in Torun (Poland; March 4 to 7). All information about the German athletes can now be found in the official DLV team brochure, which you can find here.

She was considered a big favorite at the European Indoor Championships in Torun (Poland; March 4th to 7th) over 60 meters. Now Ewa Swoboda from Poland has to give up her dream of defending her title. As the Polish Athletics Association announced on Twitter on Wednesday, the 23-year-old tested positive for Corona. A second test should now follow.

Newspaper: Japan against foreign fans at the Olympics

According to a media report, the Japanese government is seeking to exclude foreign viewers from the Olympic Games in Tokyo, Japan. The background is the continuing great concern among the population about the spread of the corona virus, wrote the newspaper “Mainichi” on Wednesday, citing several unnamed sources. A decision on this question should be made by the end of March, said organization chief Seiko Hashimoto on Wednesday. dpa

The German Olympic Sports Confederation and the Federal Ministry of the Interior presented the “National Strategy for Major Sports Events” on Wednesday at a hearing of the Bundestag sports committee. The 103-page long joint effort is intended to help make Germany fit in the race to host international championships through to a successful Olympic bid. dpa

Barefoot on snow: Max Weigand with a new record

Max Weigand broke an unusual world record. At the beginning of February, the 25-year-old ran the half marathon distance in 1:12:38 hours on a grass pitch in his adopted home Basel (Switzerland) – barefoot on snow. “This record has been on my to-do list for a long time. I actually wanted to attack him in December or January. But it just didn’t snow in Basel, ”said Max Weigand after his run. It has not yet been decided whether the record will be officially recognized: “I will send the video and photos to Guinness Wold Records. There it will be decided whether my time will make it into the official statistics. “

“Time” names Joe Biden and Kamala Harris as people of the...

Report: Hard lockdown in Germany by Wednesday at the latest

Astra Zeneca vaccine: which vaccine should it be now? Whatsapp: Warning of this message – even from friends