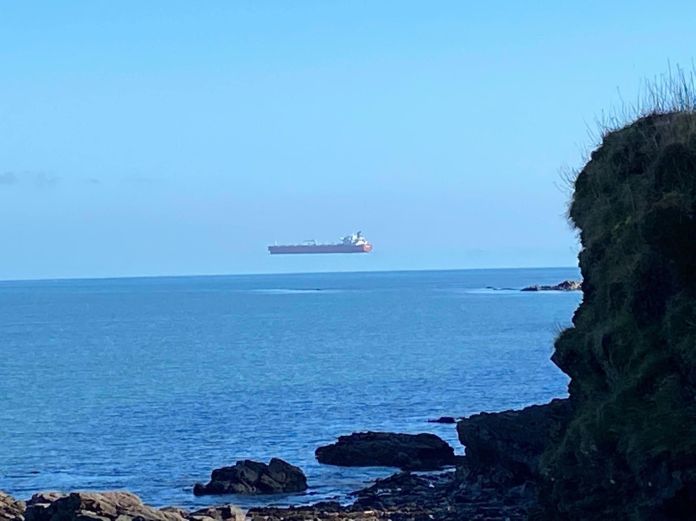 A walker caught a spectacular snapshot off the coast of England. A ship just seemed to float in the air.

David Morris was walking the coast near Falmouth in the English county of Cornwall when he made a bizarre discovery. In the far distance, a cargo ship seemed to hover in midair over the horizon. The sight of the mysterious airship made him completely “speechless”, he later told the BBC.

The pictures that the Brit took of it are now going around the world. But this is not a clever photo montage, and secret services or extraterrestrials do not have their fingers in the game. As the meteorologist David Braine explains on the station’s website, Morris witnessed a rare phenomenon.

This only comes about under “special atmospheric circumstances” that “bend the light”. The reason for this could be an inversion weather situation with different air temperatures. Closer to the water there is cooler air, while the air above is warmer.

“Because cooler air is denser than warmer, it bends the light for the viewer and thus changes the appearance of a distant object,” says Braine. This creates a particularly spectacular mirage.

Another explanation for the surprising snapshot could have been special cloud constellations. According to the expert, such optical illusions mainly occur near the Arctic. In Great Britain you can only rarely see them and especially in winter.

A similar sighting had taken place a week ago in Aberdeenshire, a few hundred miles from Falmouth.

The British are already lying on the beach in Cyprus from...

According to police, militia plans to attack the Capitol: US House...

Astrazeneca: Nurses complain about side effects of corona vaccine