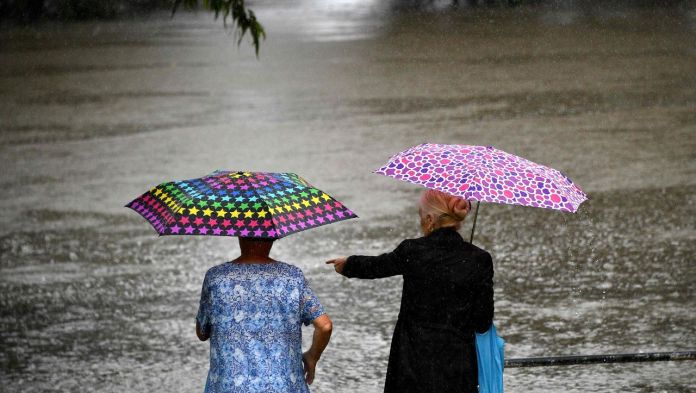 Roads are under water, rivers swell massively: Days of heavy rain in eastern Australia triggered the worst flooding in decades and the evacuation of entire towns. Authorities on Sunday classified the situation in parts of the state of New South Wales as a natural disaster and had people escaped from their homes to safety at night.
“Unfortunately, parts of the coast in the middle north are experiencing a situation that only exists once in 100 years,” said the head of government of the most populous Australian state, Gladys Berejiklian, at a press conference. Some areas in the west of Sydney have recorded more than 300 millimeters of precipitation since Friday morning, exceeding previous highs. According to the meteorological authorities, record rainfall of more than 400 millimeters was recorded near Port Macquarie, north of Sydney.
The authorities warned the population on Saturday of “potentially life-threatening flash floods” in lower-lying areas. Several hundred people had already been taken to emergency shelters north of Sydney on Saturday, the police said. Then on Sunday another thousand people were called to leave their homes. Prime Minister Scott Morrison spoke of “absolutely heartbreaking images” of flooded homes and communities.
The prospect: even more rain

The meteorological service issued a severe weather warning for an almost 900 kilometer long strip along the east coast because of the persistent heavy rain and stormy winds. The hinterland in the west of Sydney was also affected: There the masses of water sloshed over a dam that secures the water supply to the metropolis.

In the municipality of Mondrook, a good 200 kilometers further north, an entire house was lifted from its foundation by the floods and washed away, as can be seen on TV pictures. Across the Manning River, in Taree, firefighters rescued people from their flooded homes.

Despite the dramatic situation, there were initially no reports of fatalities. But that could change, because a look at the weather forecasts does not bode well – on the contrary: Meteorologists fear that it will continue to rain heavily in the coming days. Since rivers that have overflowed should take longer for the flood to drain even after the rain has ended, the state disaster control expects operations “until well after Easter”. This year, Easter Sunday falls on April 4th.

Corona live: Police break up a birthday party with 27 guests...

The mutants are coming – what does this mean for the...

Because of Corona: Vanessa Mai postpones her tour for 2022

Corona: mass tests for educators take place at the VAZ