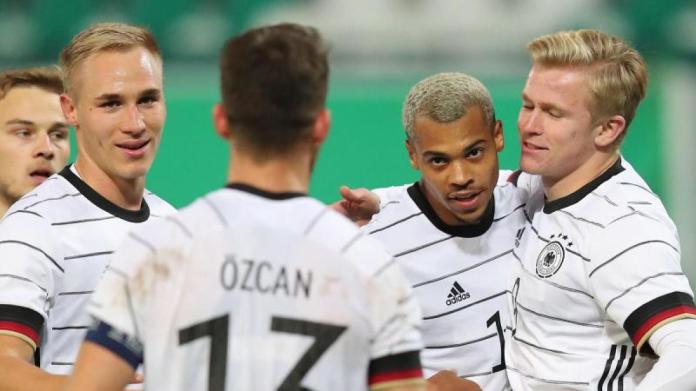 Germany – Netherlands live on free TV and stream: The teams will play against each other today on March 27, 21 in the group stage of the 2021 U21 European Football Championship. Here you can find all information about the transfer.

Germany against Netherlands live im TV and Stream: In the group stage of the U21 European Football Championship on Saturday, March 27th, 2021, the two teams will meet.

This year, the 2021 European Under-21 Football Championship will take place in two countries, namely in Hungary and Slovenia. It was originally planned to hold the U21 European Championship entirely in June. However, due to the still tense corona situation, the organizers could not implement this. Therefore, the schedule has been split up and the group stage duels will now be held in March. The finals take place in May and July.

Where can the match between Germany and the Netherlands be followed live on television and online? Can the duel also be seen on free TV? And is there a free stream? You can read the answers and everything you need to know about broadcasting the group stage of the 2021 U21 football championship here in this article.

Germany – Netherlands live on free TV and stream: Broadcast of the U21 European Championship on March 27, 21

When meet Germany and the Dutch national team face each other in the U21 European Championship? Here in this overview you will find all the important information:

Broadcast of the U21 European Championship 2021 on free TV: Which games can be seen for free on TV and online?

The games of the 2021 European Under-21 Football Championship, in which Germany is involved, will be broadcast by the television broadcaster ProSieben broadcast under the football brand “ran” on free TV. Together with expert and ex-national goalkeeper René Adler, presenter Christian Düren arranges what is happening on the field. In addition, Matthias Stach will be there as a commentator during the games.

Broadcasts three quarters of an hour before the start of the Germany Games ProSieben a corresponding pre-run live from the stadium. Interviews and discussions with experts are shown. On March 27, 21, ex-Orange star Rafael van der Vaart will be present as a conversation partner on the show before the game against the Netherlands.

All other games of the U21 European Championship, which take place without German participation, can be viewed live on free TV ProSieben Maxx or as a free stream ran.de be viewed: directly to the side.

As UEFA announced, the group stage matches of the U21 European Championship in Slovenia and Hungary will take place without a live audience and fans in the venues due to the ongoing corona pandemic.

However, the European Football Association will continue to monitor current developments in the two host countries. If there is an improvement in the situation, after consultation with the responsible authorities on site, spectators should be allowed back into the stadiums from the final round in June.

Great media coverage for the U21 European Championship 2021

The U21 European Championship will be shown on television in more countries this year than ever before. For example, championship games will be broadcast live in 47 European countries.

And the 2021 U21 European Football Championship also plays an important role beyond the borders of Europe. Duels can not only be seen live on TV in America, China and Japan, but also in India, North Africa and the Middle East.

The season opener in Australia is in danger

Approval for Biontech / Pfizer: EU has a corona vaccine

Ex- “Suits” colleague about Duchess Meghan: She was there for me...

A wanted criminal accidentally played along in the “crime scene”