While actor Fritz Wepper is currently struggling with health problems – according to a recent report he is “on the mend” – the 20th and final season of his successful series “Um Himmels Willen” will start on Tuesday (March 30th, 8:15 pm) “(2002-2021, Das Erste) with the double episode” Suddenly rich “and” Ready for the stage “.

In the popular format, Wepper has been seen as Mayor Wolfgang Wöller for almost 20 years, connected in an eternal love-hate relationship with the Kaltenthal sisters. During the interview day a few weeks ago, the then noticeably saddened leading actor told the news agency spot on news, among other things, how difficult it was for him to say goodbye to the series and his “very dear” colleagues.

How do you feel when you think that the last “For heaven’s sake” season is about to start?

Fritz Wepper: The feelings are mixed. On the one hand, it was surprising to me. Physically and mentally it was not easy to accept this decision of the production. In the end, however, it is always better to stop when the rate is still right and you are not dismissed for failure or rejection. I comfort myself with a positive outlook: things have to end for others to begin. This also affects me insofar as I am currently working on my autobiography and another book – “Without a dog, I’m not a person”.

The new “For Heaven’s Sake” episodes have become very entertaining again, even though they were shot under Corona conditions. How did you experience this special shoot?

I’m not surprised that the consequences are entertaining. They were created under special conditions. Filming was originally scheduled to start at the end of April. But we couldn’t do that because of Corona. When it started, I was tested three times a week, the team twice. These tests are not pleasant, but they have to be so that we can all survive it in good health. In addition, everyone has always worked very conscientiously with mouth and nose protection. Shooting under corona conditions is very special and exciting. In the second week of December everything was in the can and I am very happy that we finished on time.

There are 13 new episodes. Among other things, it is about a wedding. Do you like weddings?

Like birthdays, weddings are very welcome celebrations with great emotional significance. At the moment you can’t really celebrate either of these appropriately. In this respect, I’m happy that I got married when it was still possible to celebrate. (Note d. Red: Fritz Wepper was married to Angela Wepper from 1979 until her death in early 2019)

One episode of the new “For Heaven’s Sake” season raises the question of whether the next Pope should be a woman. What do you make of it?

The question is permissible.

Have you ever had an audience with the Pope?

No, but I met in the Vatican. My wife and mother-in-law had an audience. That is something very special. A photo that is in my living room reminds me of this incident. I like to look at it and think about something special.

How are you going to watch the very last “For Christ’s Sake” episode?

I always watch all the programs on TV on the day they are broadcast. Because all the circumstances such as the weather or current events can be important. I watch the very last episode with family and friends, if possible. But of course that depends on the circumstances and restrictions.

The audience then gets to see the duet that you sing together with your long-time serial colleague Janina Hartwig (sister Johanna “Hanna” Jakobi). What can you reveal about that?

I can only reveal that it is of special quality and that we are saying goodbye to the audience – including a look into the camera that is aimed directly at our audience.

Did you have to fight back tears?

Yes, that’s exactly how it was. The shooting of the final scene was more tears than laughter. But saying goodbye to the team wasn’t easy either. From the colleagues with whom you have worked for 19 years and whom you have grown very fond of over the years. That was something special.

Are there any plans to meet again?

Yes, of course we will celebrate a farewell party. But the date cannot yet be set for known reasons.
© 1&1 Mail & Media/spot on news

The new season of the successful ARD series “In allerfreund” has just started. But fans of the series have to prepare for a break again.

ProSieben is canceling “The Show with Sorting” with immediate effect –...

Fans saved singer Cher from an assassination attempt – “kill you” 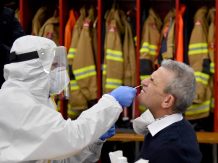 Mass tests – “makes sense” for experts with a targeted follow-up...

“Tatort” from Dortmund: What to do if there is a fire?

Season 2 started, Wrath of the Druids in late April